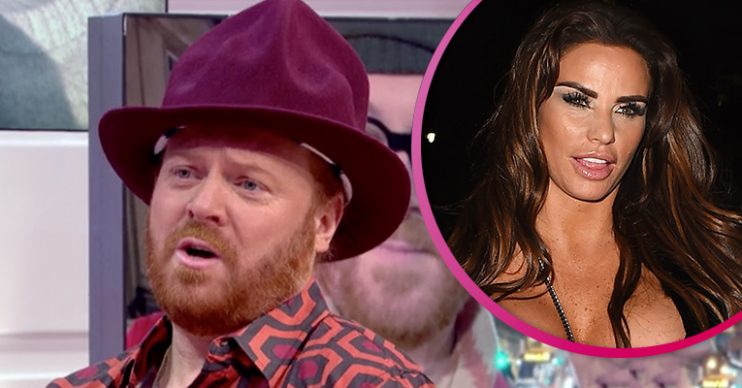 She won't be getting an invite back…

Keith Lemon has revealed that model Katie Price is his “worst” ever guest on Celebrity Juice.

Keith replied honestly when he was asked who his most annoying celebrity guest had been.

“Not annoying but Katie Price always comes up as the worst guest, simply because she was so quiet,” he revealed.

However, far from talking about Katie behind her back, he has told her the reason why she won’t be invited back on the show.

Katie Price always comes up as the worst guest, simply because she was so quiet.

Keith said: “I’ve told her to her face as well. I said: ‘You’re the worst guest because you was so quiet.'”

The Celebrity Juice host said that Katie had “a wall built up around her” and said he thought she was “scared of having the mickey taken out of her”.

Previously, Keith had told Metro that he probably wouldn’t invite Katie back on the show after an appearance on it with her then-husband Peter Andre.

He said: “Maybe it was during her turbulent times with Peter Andre, because he was on with her once and they were just arguing all the time.”

Keith added: “I couldn’t remember if I thought it was real or for the cameras for their reality programme, but obviously we now know it was real and they were actually falling out.”

Keith’s revelations come as it was claimed that Katie is hoping to restart her career over in the States.