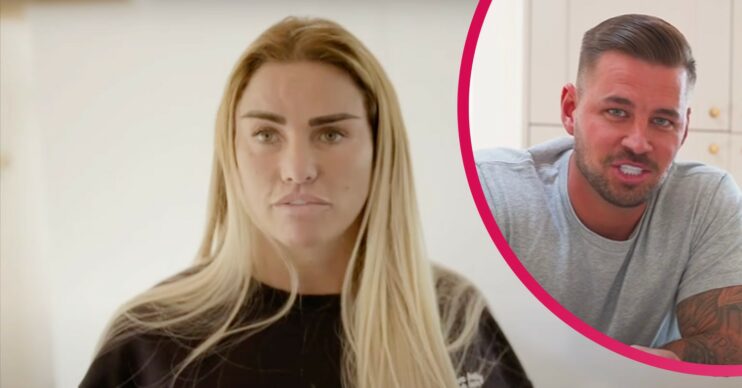 Are Katie and Carl having a baby?

Katie Price has dropped a huge hint that she’s pregnant with Carl Woods after news leaked that she’s building a nursery at her Mucky Mansion.

The claims comes just days after she was reportedly spotted outside a fertility clinic with her fiancé Carl.

Katie, 43, has dropped her biggest hint yet that she’s pregnant with baby number six recently.

According to The Sun, the former glamour model is planning to build a nursery in her s0-called Mucky Mansion.

A source spoke to the publication about the star’s plans.

“Katie will be making over a room in the mansion as a ‘baby room’,” they said.

“She’s been open about her plans to add to her family and has the space so why not.”

A show about Katie renovating part of her mansion aired back in February.

The house fell into disrepair over the last few years after vandals broke in and left the taps running, flooding the kitchen.

The news about Katie’s plans to build a nursery comes just days after she was spotted outside a fertility clinic in London.

An onlooker spoke to the MailOnline about seeing Katie and Carl outside the building recently.

“As soon as Carl parked up in his Porsche with a personalised number plate, Katie jumped out and headed straight to the clinic,” they said.

“She looked happy and keen to get on with the meeting she had planned,” they continued.

“‘The prospect of adding to her brood is clearly an exciting one for them and they’re keen to get going.”

The former glamour model has been open in the past about wanting to try for baby number six with Carl.

Back in February, during an appearance on Lorraine, Katie revealed that she and Carl were planning to go down the IVF route.

“The thing is, it’s weird. Although I feel young, my body is not,” she told Lorraine Kelly.

“I’ve learnt this, that each cycle that you have, you lose eggs each time,” she continued.

“I didn’t know that and obviously I’m 44 this year and I haven’t got as many eggs as I wanted so we’re having to do IVF and we’re doing it,” she said.