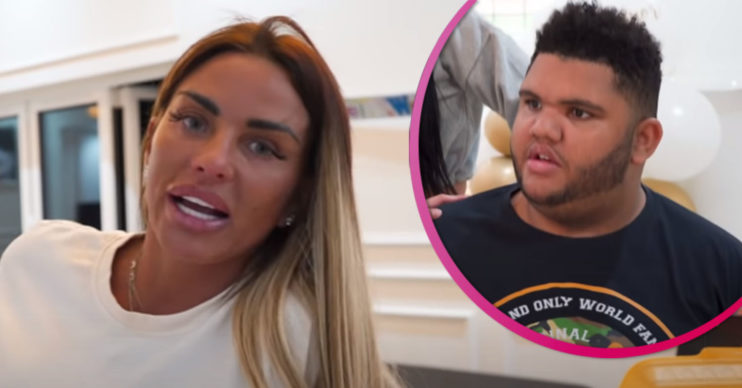 Harvey was unable to join Katie after spending time in hospital.

Reality star Katie Price has finally reunited with her son Harvey after arriving home from holiday.

The 42-year-old star recently jetted to Turkey with new man Carl Woods and her children, Junior and Princess.

Despite being “heartbroken” Harvey was unable to join the family on the trip, Katie was all smiles as she reunited with her son today (August 5).

You have to love Harvey so cute x

Katie documented the special moment on Instagram, sharing a snap alongside Harvey in their home.

She captioned the shot: “Back home with my @officialmrharveyprice ❤️❤️.”

The mum-of-five followed the post with a video of herself cuddling up to the teen.

Harvey said: “I love it when Mummy’s home.”

Fans rushed to comment on the adorable video, with one saying: “I love Harvey so much… Katie your children are a credit to you ❤️.”

A third added: “💕 he is adorable hope he is better now x.”

Why wasn’t Harvey allowed on holiday?

Harvey, who is autistic and partially blind, spent over a week in hospital with breathing problems ahead of Katie’s trip abroad.

Sadly, doctors reportedly declared him unfit to travel and Katie was forced to leave her son in the UK.

Speaking about Katie’s decision to not take Harvey to Turkey, a source told The Sun: “Harvey will stay at home with his carer and Katie will still go.

Meanwhile, Katie recently said doctors “discovered things” about Harvey, but she’s not ready to reveal what they are.

Typically, Katie’s holiday wasn’t without some drama after breaking both her feet in a bizarre accident.

The former glamour model was taken to hospital after jumping off a wall at a theme park and fracturing both heels – leaving her unable to walk for three to six months.