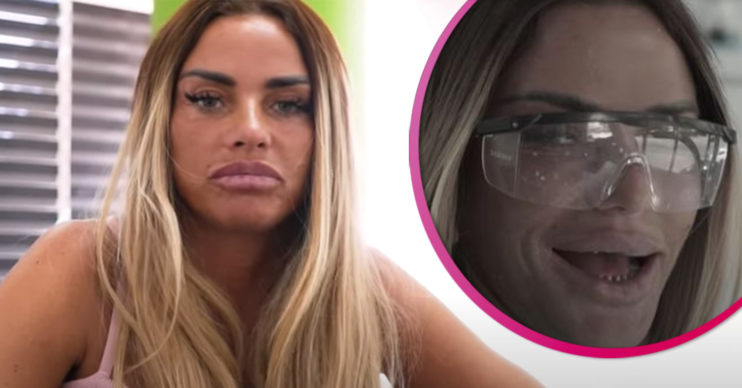 Katie Price showed off her natural teeth in the dentist's chair

Katie Price has left some of her fans in a state of shock after she revealed her natural teeth.

The mum-of-five, 42, has had veneers for years.

And she’s currently on holiday with new love Carl Woods – where they each got new sets of veneers.

Addressing her some 210,000 followers she slurs to the camera before getting further dental work.

She said: “I love it when you talk dirty” with horror movie like music playing in the background.

With her veneers removed, her teeth appeared short and far and few between.

A fair few viewers voiced their concern over her natural teeth’s appearance in the comments.

One viewer compared it to a scene out of the infamous horror movie Saw.

The viewer wrote: “Her in the dentist chair wtf something out of Saw.”

A further fan joked that Katie has turned into a zombie: “The bit at the end her real teeth that actually scared me #katypriceisazombie.”

Another viewer agreed with: “Me too I felt sick” and yet another commented: “Is that not what all peoples teeth look like with them fake ones over the top? Pretty gross.”

Elsewhere in the video, Katie explained just how she broke both her feet.

What did Katie Price do?

She says she attempted to take a short cut by jumping off a wall.

Unfortunately, the wall was much higher than she anticipated.

The former glam model explained: “Silly little accident. I was running, jumped over a wall because it was a little short cut.

She added that the doctors in Turkey had wanted to perform an operation and insert pins.

However, she says she would rather receive further medical treatment when back in the UK.

With casts on both her feet, she also claimed that her toes are beginning to turn green.

She said: “If you are looking at my toes they are starting to go green.

“At the moment they are still raw. I’ve had no operation they’ve just put them in a cast.”