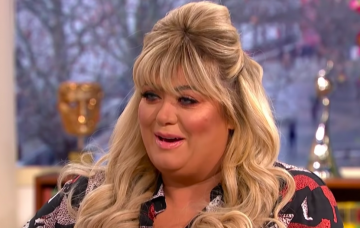 Four days after swearing off diets and vowing to embrace body confidence, Gemma Collins’ friend has confirmed she’s planning to fly to a health bootcamp in Portugal next week.

The Dancing On Ice contestant – who lost two-and-a-half stone during training for the skating show – will be joined at the juicing and exercise retreat by her boyfriend James ‘Arg’ Argent.

Speaking to The Sun Online, Gemma’s DOI skating partner – and new BFF – Matt Evers confirmed the trip, saying: “Gemma is so determined to stay healthy. She misses the adrenaline of the Sunday nights on the show and the happy endorphins from the exercise, and she really just misses sweating it off.

“She’s heading to Portugal for a juice camp next week to help her stay on track. When she gets back we will work out an at-home exercise program for her. She’ll also have ready-made healthy meals delivered to her, which can be no-carb, or low carb, whatever she wants.”

The revelations comes a few days after the TOWIE diva slammed “weight loss nonsense” and diet foods in an Instagram post.

She wrote: “Stop wishing for other people’s bodies. Find peace in your own. Just eat food. Eat real food, be active and live your LIFE. Forget all the diet and weight loss NONSENSE. It’s really just that … NONSENSE. Spreading LOVE and POSITIVITY.”

The reality star was a controversial addition to the skating show as her antics made headlines week after week.

It was recently reported that Gemma will be returning for the show’s finale on March 3.

And when Gemma, 38, is back from her health trip, Matt, 42, said she’ll be back on the ice rehearsing for the ITV show.

He explained: “As soon as she’s back from Portugal, it will be straight into rehearsals for the Dancing on Ice finals, so we’ll be skating together again.”

The self-proclaimed diva had a tumultuous time on the show, as she got into a spat with judge Jason Gardiner and suffered a few injuries.

What do you think of Gemma’s weight loss plan? Leave us a comment on our Facebook page @EntertainmentDailyFix and let us know what you think.