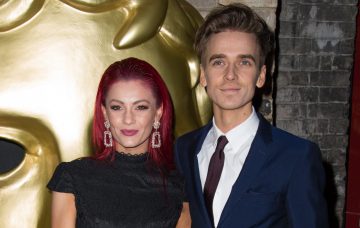 Joe Sugg teases engagement plans on The One Show

No pressure then, Joe!

Joe Sugg has teased plans of a potential engagement with girlfriend Dianne Buswell.

Co-hosting The One Show on Friday (February 22) with presenter Alex Jones, Joe heard how guest Matthew Morrison popped the question to his partner – and the star-studded tale had the 27-year-old vlogger joking that he was taking note.

Former Glee actor Matthew explained how Coldplay performed for him and his wife, Renee Puente, and Sir Elton John announced the news at his lavish charity garden party, the White Tie and Tiara Ball.

Alex asked Matthew if the story was true, and the The Greatest Dancer judge admitted it was, adding: “I got engaged before he announced it thankfully.

“[Sir Elton] kinda announced it to the world. To the party, and then the world.”

Matthew continued: “Chris Martin actually sang a song for us that night so it was just a glorious evening.”

Joe, who was visibly impressed by the story, joked that Matthew had “set the bar” – suggesting he’s been thinking about popping the question to Dianne.

I finally won a glitterball, but this girl is still a million times more special.

Alex offered Joe a bit of advice on what he should do if he decides to take his relationship with Dianne, a pro on Strictly Come Dancing, to the next level. She told him to keep it “low key” but added that he should “aim for Coldplay.”

Joe and Dianne were partnered in the last series of Strictly. Although beaten into second place, the pair confirmed their romance in December, not long after the final.

But rumours of a secret romance were circulated throughout the dance competition, and in November they found themselves having to deny a cheeky kiss at the raucous Strictly after-party in Blackpool.

The rumours had started swirling a month earlier, not long after Dianne split with her boyfriend, Emmerdale’s Anthony Quinlan. The pair had been dating for 10 months.

Nowadays, Joe and Dianne make no secret of their romance, often gushing over one another on Instagram.

A snap posted in January had many fans wondering if the pair had already secretly got engaged, as Dianne appeared to be wearing a ring on her ring finger.

But the more eagle-eyed among Joe’s 5.8 million followers were quick to point out that the photo was, of course, in reverse – and that the ring was on her right hand.

Do you think Joe has what it takes to pull off an impressive proposal? Leave us a comment on our Facebook page @EntertainmentDailyFix and let us know what you think.