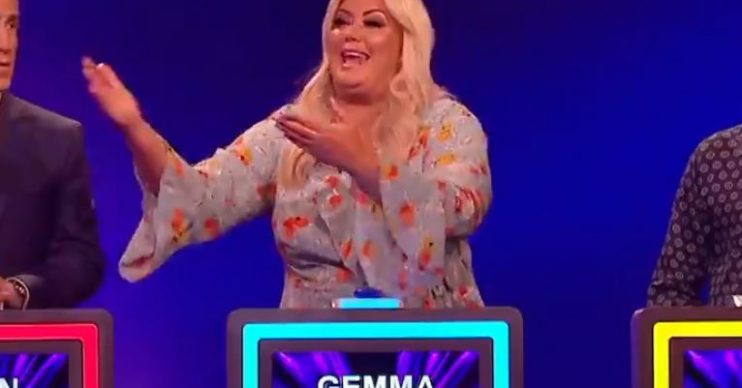 She had no idea how to play

Catchphrase viewers were in stitches seeing diva Gemma Collins struggle to grasp the rules or land points on the hit ITV quiz show.

On Thursday (02.01.20), the channel aired a repeat of Gemma’s stint on the programme from last summer, when she appeared alongside Strictly Come Dancing pro Anton du Beke and The Chase favourite Paul Sinha.

As the quiz got underway, it quickly became apparent that the GC had absolutely no idea how to play.

Read more: Gemma Collins on her fears for baby she’s not had yet!

Host Stephen Mulhern even admitted at the beginning of the programme that Gemma wasn’t particularly familiar with the format.

He told the studio audience and viewers at home that she had approached him backstage, as he was making himself a cup of tea before filming started, to ask how the game was played.

Shortly after the quiz started and Anton got ‘Falling flat on your face’ correct, Gemma interrupted proceedings to check she had a handle on the rules.

Tonight @Catchphrase 7pm your all going to be so proud of me 💗💗🍾 pic.twitter.com/Q0dAdgz4al

“Sorry, can I just ask something? Right, is ‘fall on your face’ a phrase?”

The others told her it was and she continued: “So it’s as simple as that person walking along… and you say what you see? Sorry, I thought you had to come up with something that rhymed with it!”

Stephen said: “That’s how simple catchphrase can be. Just literally say what you see.”

He then quipped, “It’s like you on Dancing On Ice” in reference to Gemma’s shocking tumble during last year’s installment of the hit ice skating competition.

Sorry, I thought you had to come up with something that rhymed with it!

At another point in the show, Gemma unwittingly broke the rules by blurting out an answer – despite the fact that Anton had clearly buzzed first and was about to speak.

Stephen later warned her not to give anything away while Anton mulled another answer, as he said: “Gemma thinks she knows now, don’t say what it is Gemma!”

The GC protested: “But I’m not going to get that far because I don’t know what the question… I don’t know how to play! I’m not getting nothing right!”

Odds on Gemma getting one? #catchphrase

Will Gemma even get one? #Catchphrase

#catchphrase would love to be as smart as Gemma 😂😂

Someone else tweeted, after Gemma got some right: “#Catchphrase Gemma actually got a couple. she’s so funny.”

A fifth joked, with crying laughing emojis: “#Catchphrase Would love to be as smart as Gemma.”

“Watching Catchphrase from tonight,” a sixth wrote when the episode first aired, adding with laughing emojis that she completely “adores” the former TOWIE star.