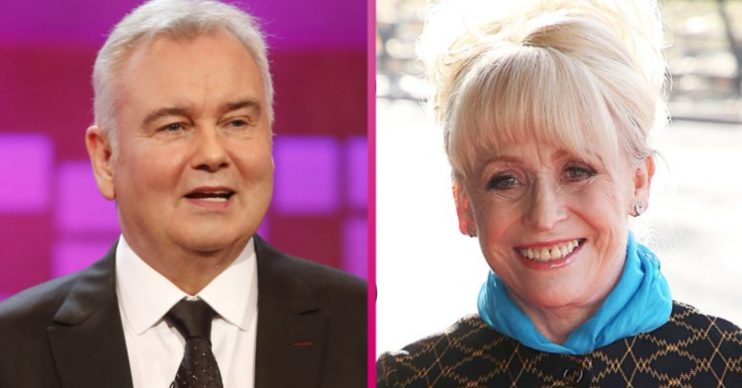 Eamonn Holmes moved his Instagram followers as he shared an unseen picture of his friend Dame Barbara Windsor.

The image showed the This Morning host and his presenter wife Ruth Langsford sitting with the EastEnders star.

All three stars are beaming at the camera and they appeared to be sitting in a theatre when the photo was taken.

However, it is not confirmed when the encounter happened.

Read more: Meghan Markle ‘broke down in tears’ after telling off from royal aide

But Eamonn seemed to suggest much-loved Barbara had already begun her fight with dementia after noting “this wasn’t long ago”.

He also took the opportunity to publicly wish the Carry On legend a happy birthday.

This wasn’t so long ago.

Eamonn captioned the image: “We laughed all night.

“This wasn’t so long ago. Just came across it and realised it was Barbara’s birthday this week.

“We know it’s been an emotional week for Scott but wanted to share the memory with him and you.

We laughed all night …. this wasn’t so long ago. Just came across it and realised it was Barbara’s birthday this week. We know it’s been an emotional week for Scott but wanted to share the memory with him and you. Happy Birthday Babs 🎂 x

Eamonn Holmes comes in for praise from fans

Eamonn’s post quickly amassed tens of thousands of likes from devoted fans of both stars.

“Barbara’s smile could light a room,” remarked one follower in the comments section.

Another moved observer wrote: “So kind and thoughtful of you Eamonn to share this beautiful photograph.”

“What a beautiful photo, my heart is melting,” added another.

There were also many comments sympathetic to Barbara’s condition and what her husband Scott Mitchell is going through.

Last weekend Scott told The Sun he ‘couldn’t stop crying’ after she recently moved into a care home.

He said: “It’s always been my biggest fear. That one day I would have to take her somewhere and she’d be thinking, why would he do this to me?

That fear has become a reality. It’s something I never wanted.”

One person wrote about Barbara’s Alzheimer’s on Eamonn’s post: “Bless her. Cruel disease we need to cure for good.”

Another added: “I pray Scott holds up, I’m gutted this is happening to her.”

And someone else reflected to Eamonn: “One of the things I love about you is your empathy for others.”

Eamonn also replied to one commenter who reckoned they had spotted another famous face in the picture to confirm they were right.

Can you see them?