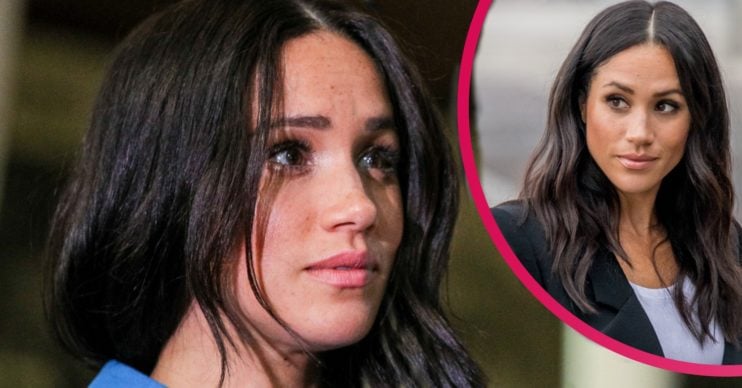 Warning reportedly left the Duchess of Sussex in tears

Meghan Markle was reportedly reduced to tears after she was told off by a palace aide.

The upcoming book Finding Freedom alleges that Meghan was warned after wearing a particular piece of jewellery.

Prince Harry reportedly gifted Meghan a necklace featuring both of their initials in the early days of their relationship.

However, after she was photographed wearing the gift in Toronto, Canada, a furious palace staff member reportedly told her off.

The book, written by Omid Scobie and Carolyn Durand, states: “She was advised that wearing such a necklace only served to encourage the photographers to keep pursuing such images – and new headlines.”

Why was Meghan Markle so upset?

The writers continue that Meghan calmly listened to the advice.

However, shortly after, she phoned a friend in tears.

Read more: Princess Beatrice celebrates her 32nd birthday with a message from the Queen

She allegedly claimed that she “couldn’t win” when it came to pleasing the royal family.

Meghan reportedly told her friend: “I don’t know what to say. It was only yesterday that people online were saying I look miserable in pictures, because I was trying to just ignore the [photographer].”

It is not like she is sending an overt message, her T-shirt doesn’t say Prince Harry and Meghan forever.

Now two royal experts have spoken out in Meghan’s defence.

Speaking on the Royally Obsessed podcast, royal commentator Rachel Bowie said the warning seems a little “over the top”.

How are royal commentators reacting?

Meanwhile the podcast’s co-host Roberta Fiorito said: “What I think was crazy was that immediately she was reprimanded.

“She got a call from senior palace aide saying wearing necklaces like that only encourage the photographers to pursue her and create more headlines.

“When she was given that feedback she listened and just took it then she broke down in tears to a friend afterwards. It is kind of like damned if you do and damned if you don’t.

“I feel like right out of the gate she had to deal with all that,” Roberta added.

Rachel also commented that the necklace was very discreet.

“I also feel like you have to zoom in so much the photos to see the necklace. So, I am surprised that palace aides were so against her wearing something like that when you really have to look so closely to see it.

“It is not like she is sending an overt message, her T-shirt doesn’t say Prince Harry and Meghan forever.

“I just think it was a little over the top.”

Meghan and Harry stepped down from their roles as senior royals in March of this year.

They now reside in Los Angeles, California with their one-year-old son, Archie.