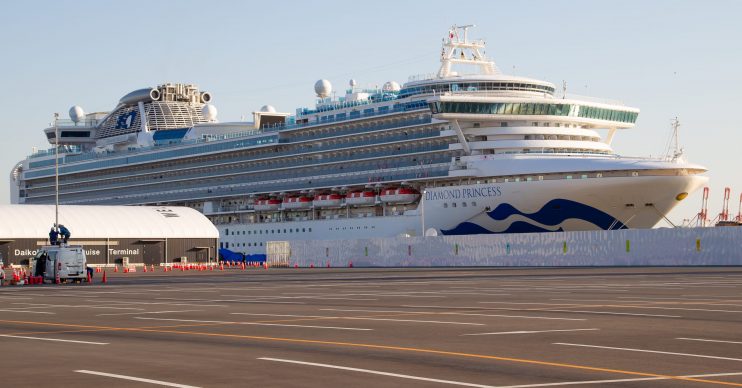 Britons from the coronavirus hit cruise ship the Diamond Princess in Japan are set to be flown home amid reports two passengers have succumbed to the deadly disease.

An 87-year-old man and a woman aged 84, both Japanese, have died after contracting coronavirus aboard the vessel, which has been quarantined near Yokohama since February 3, according to the Daily Mail.

Both had underlying health conditions are were taken away from the ship on February 11 and 12, the newspaper reported, for hospital treatment.

The pair tested positive for coronavirus, but the woman’s cause of death has reportedly been listed as pneumonia.

More than 600 people among the 3,700 passenger total have been infected with coronavirus, The New York Times reported on Wednesday (February 19 2020).

Now, according to The Telegraph, Brits from the ship are set to be flown home.

Foreign Secretary Dominic Raab confirmed that an evacuation flight for Britons stuck on the vessel will leave Tokyo tomorrow (Friday, February 21 2020). There were reportedly 78 British passengers on the ship when the virus first broke out.

Earlier this week, a British couple who posted regular updates on Facebook after being held in quarantine on the ship revealed that they had contracted coronavirus.

David and Sally Abel had previously passed all medical checks but on Tuesday (February 18 2020) morning, David confirmed they had the disease and were leaving for hospital.

In another update posted shortly after, he accused authorities of a “setup” as he revealed they were being taken to a “hostel” rather than a hospital, writing: “Frankly I think this is a setup! We are NOT being taken to a hospital but a hostel. That’s where partners are sent waiting out their quarantine.

Full health inspection and now we know what’s going on.

“No phone, no WiFi and no medical facilities. I really am smelling a very big rat here! Waiting for the transfer now. xx.”

Today (February 20 2020), David updated their followers and said they had arrived “in [a] lovely hospital”.

He explained on Facebook: “Outside the hospital I came over a bit weird and nearly passed out. Every pore on my body opened and I was wheelchaired to our room.

“Full health inspection and now we know what’s going on. We both contracted a cold (unaware of) and it has not yet turned into pneumonia. (We do have corona virus).

Writing further, David praised the medical professionals looking after him and Sally as he said they were “both in the best place”.

“They do know what they are doing,” he continued. “And our two nurses are gorgeous. Sally likes the Dr too. Following treatments, we require two days of all-clear tests, then we go for another big third round of tests. Wi-fi will not work for me, so this will be the final communication for some time.”

The latest aboard the Diamond Princess follows warnings from experts the coronavirus outbreak could end up killing 45 million people globally if it’s not contained.