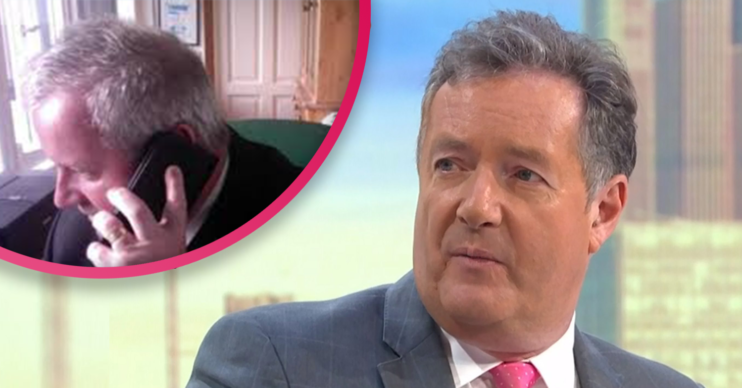 MP Ian Blackford appeared on the show to discuss the issue of charging NHS staff to use hospital car parks.

However, when it was his time to talk, the SNP member could be seen with his back to the camera casually taking a phone call from somebody else.

“We can’t talk to him’ because he’s just on the phone,” a shocked Susanna Reid commented.

Piers then looked irritated as he tried to get his guest’s attention.

“I think he’s just finding out what they do in Scotland,” he quipped.

“Mr Blackford are you there? Mr Blackford, you’e live on Good Morning Britain!

“Sorry are we interrupting you?”

When Ian eventually realised he was live on air, his explanation made matters even worse.

As he put the phone down, he said: “It’s your competition over on the other side.

“I’m going live with them in a couple of minutes, so…”

Furious, Piers snapped at Ian: “Just tell them they’re going to have to wait! So sorry we dragged you away.”

Those tuning in at home found the bizarre scenes hilarious and we were quick to take to Twitter afterwards.

“Ian Blackford casually on the phone during a debate on live tv @GMB,” one wrote.

“Surely that chat with a “competitor” could have been a text message? Looked like a rabbit caught in headlights.”

Another added: “Bridget Philipson failing to be capable of answering the most simple of questions and Ian Blackford answering his phone whilst live on TV?!

“Embarrassing… Why do they bother? #GMB.”

Moments later, a third wrote: “Funny when he was on his phone!”

Piers will have undoubtedly felt particularly irritated by the blunder given GMB’s rivalry with BBC Breakfast.

Recently, the pair have squabbled about MPs boycotting GMB while still happily agreeing to appear on the Beeb.