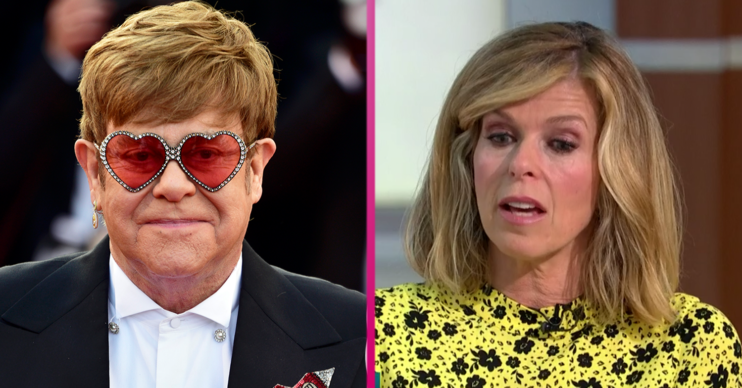 The GMB host's husband is still in hospital

Speaking on Good Morning Britain today (July 8), the presenter revealed she was caught off-guard when the music icon phoned her.

“It was so strange,” she told Piers Morgan and Susanna Reid.

“Elton said, ‘I know a bit about antivirus stuff. I’m on board and I’ll try and help in any way I can’.”

Kate hadn’t realised but she shares a mutual friend with the Yellow Brick Road singer.

“He is just incredible,” she added. “I was so desperate because at that point, it was very hard to communicate with the hospital so I was like yes please help.

“I know it sounds extraordinary but I put the phone down and was like that was Elton John. I think he’s going to. help!”

However, Elton isn’t the only celebrity that has reached out to Kate.

David Beckham has also been in touch with the presenter.

The football legend sent her several videos for her two children Darcey and Billy in the hope of lifting their spirits.

In addition, Rob Rinder, who lives locally to Kate, has been quietly offering his support too.

Kate revealed: “It’s so strange because I love Rob and I know Rob – but I only know him as much as everybody loves him as Judge Rinder.

“And he just texted me saying ‘I live really near to you, what can I do?’ And I just thought well nothing because its as all crazy.

“But then Darecy was making a photo album and we didn’t have any blu bak, so I said how about some blue tak?

“He said okaaay – you can imagine what he must have been thinking!

“So we now have a system where I will say to him, ‘Can we have some butter and some milk’ and he will just send back a rainbow saying ‘it’s on its way’.”

Kate added: “So many people have been so lovely.”

'I just thought come on Garraway! Derek would be incensed with me. I have got to get on and do the things I’m good at.’

Kate Garraway has a very special announcement this morning.

She’s back to present the show on Monday!💪 pic.twitter.com/FIsUDDwoDC

During an appearance on Good Morning Britain today, Kate revealed that Derek is now COVID-free.

His lungs are starting to recover and his liver and kidney are also better.

But as COVID-19 is a new virus, doctors do not have any medical data and so don’t know if he will make a full recovery.

Currently, he is still in hospital but is no longer in intensive care or in a coma.