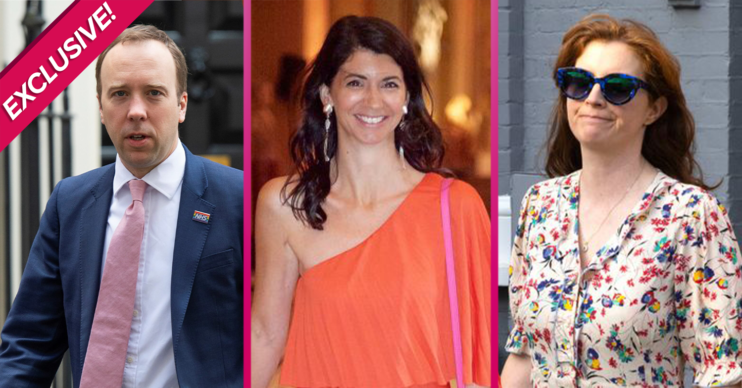 It's said they're 'setting up home' together

As Matt Hancock “leaves his wife” Martha after 15 years of marriage, relationship experts have warned of a “massive red flag” for former aide Gina Coladangelo.

The pair hit the headlines earlier this week after footage of them kissing on CCTV was released to the media.

As a result of the footage, Hancock has stepped down as Health Secretary.

He has also reportedly told his wife – osteopath Martha – that he is leaving her.

The couple share three young children – as do Gina and her husband Oliver Tress.

Matt Hancock leaves wife: Will he set up home with Gina?

Well that’s definitely what friends of the disgraced MP have claimed.

They have told the press that Matt and Gina are “in love” and they plan to “set up home” together.

Earlier today, Martha put on a brave face as she headed out on a dog walk with the family pet.

She even managed a smile for the waiting photographers.

So what have the experts said?

And, she admitted, if they do, it should come as a “massive red flag” to the woman he’s leaving her for.

“One of the issues with dating a person long term who cheated on their ex with you is that if they cheated on them, why would they not cheat on you too?

“The birth of your relationship brings anxiety, insecurity and mistrust.

“Your partner has showed their true nature before your relationship has started and it’s massive red flag.

“People who cheat have some form of a personal issue – it’s a red flag, period!” she said.

“You also need to question the self-worth and motivations of someone happy to be the ‘other woman/man’ – it wreaks of low self-esteem.

“It will not be a good combination for anyone involved,” she predicted.

He told us: “These things almost never work out.

“If he is working very closely with the woman, they are spending a lot of time together, and along with the new ‘celebrity’ status, due to the pandemic, he may even think he is untouchable, which he has just found out is not true!”

So how will Martha be feeling now?

As could be expected, Martha will be feeling pretty humiliated right now, our experts revealed.

Alex said: “This is somebody that she has trusted with her life, her husband and her best friend. To have this happen is the ultimate humiliation for her.

“She will be deeply upset, embarrassed and heartbroken. She will go through a process and wave of emotions.

In this situation she has done nothing wrong but been there by her husband’s side for him to betray her in the worse way possible.

“This is a person that she has completely trusted, and she’s been betrayed. Without trust, a relationship is unlikely to survive. It may, but is very much dependent on her forgiving him.”

Laura added: “I feel very sorry for his wife.

“The pain and humiliation must be substantial!

“No doubt during this last year he’s been working long hours and she has been supportive over this – I’m sure she feels betrayed and foolish.”

Chris Jones from TheSnugRoom.com agrees and told us: “In this situation she has done nothing wrong but been there by her husband’s side for him to betray her in the worse way possible.

“And, to make matters worse, it is now public knowledge and her embarrassment will be forever etched in her life and not to mention her children’s.”

So what do you think of our story? Tell us on our Facebook page @EntertainmentDailyFix.