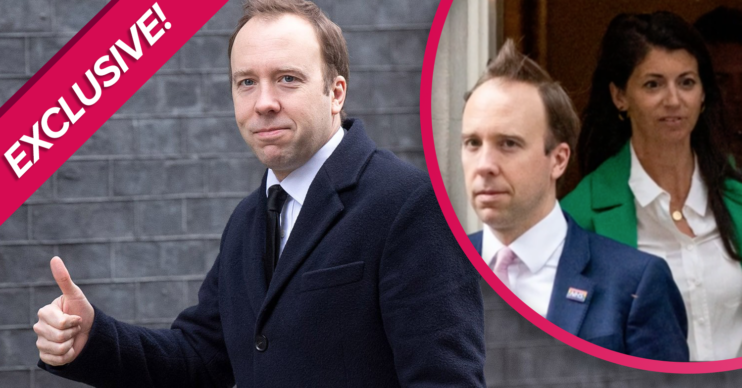 He is said to have left his wife

The Matt Hancock CCTV video features “tender and comfortable” kissing which some experts claim prove he and aide Gina Coladangelo “have reached that intimate stage”.

And it follows claims that Hancock is planning on leaving his wife of 15 years for his aide.

Matt Hancock video analysed: So what did the experts say?

She told us: “There are images showing embraces and kissing which seem very tender and comfortable. They are close and appear very used to this closeness.

Read more: Matt Hancock kissing CCTV reimagined – these new video memes have to be heard to be believed!

“What is interesting is to look at general pictures of the two together – their body language is intimate and the space between them is often small.

“They are often smiling at each other and Matt can be seen looking towards Gina when they are apart.

“Judging by their body language, I believe the affair had started before her employment to be his aide, or very shortly after,” she claimed.

‘They have clearly reached that intimate stage’

They said: “The footage is very passionate and intimate, so they have clearly reached that intimate stage.”

Alex then explained: “It becomes more than a fling when the person moves out from the marital home and moves in with the other person.

“When you meet someone new, there is a release of dopamine and serotonin, and if they are still in this stage then it is a feel good factor, until it becomes real life.”

What’s the latest with Matt and Gina?

Friends of Hancock have said that this is the way the romance with Gina is heading.

Reports earlier today suggested he told Martha he was leaving her the night the pictures broke.

And it’s since been claimed that he and Gina are “in love” and “setting up home” together.

Matt and Martha have three children, as do Gina and her husband, Oliver Bonas founder Oliver Tress.