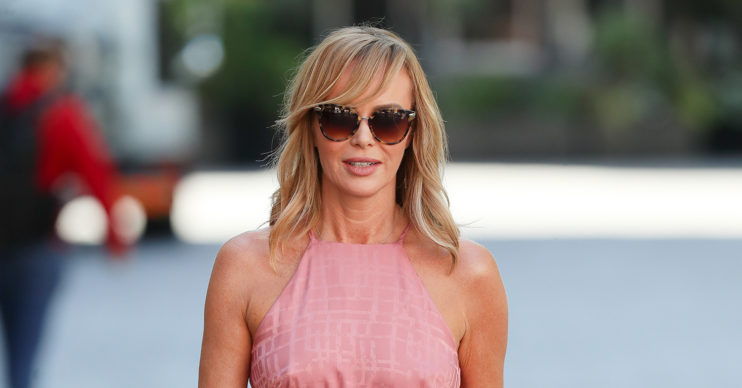 Amanda Holden appears to have a face in her kneecap

Fans were left stunned by an Instagram video posted by Amanda Holden.

The actress turned television and radio personality, 49, posted a Clap for our Carers video to her some 1.5 million followers.

In the video she is shown clapping outside her front door alongside her two daughters, Alexa, 14, and Hollie, eight.

Despite the feel good message, fans were left distracted by her knee’s appearance.

In her left knee, the outline of a face was clearly visible.

Gethin Jones was the first to pick up on the unusual sighting.

“I cannot un-see a smiley face”

He wrote: “I feel like your left knee cap is a face that’s smiling too.”

This was followed by dozens of fans chiming in with their own interpretations.

One wrote: “I cannot un-see a smiley face now.”

While another posted: “And the right one looks like Bill Clinton!!”

A third wrote: “Both knees look a little like mother Teresa!”

And a fifth agreed with: “All I can see is Donald Trump.”

And yet another asked: “Why is there a child in your knee??”

Others criticised her eldest daughter, Alexa, for appearing less than enthused to be joining in with the cheering.

One wrote: “Your eldest looks interested” followed with a series of crying face emojis.

Another commented: “Her eldest daughter always look so grumpy god do u know happiness.”

However, several fans rushed to the teen’s defence.

One wrote: “Most teenagers are like that, hate being filmed or having their photos done especially with their parents.”

And another posted: “Don’t you know how to be kind?”

Amanda has been a vocal advocate for the NHS since the coronavirus pandemic broke out.

She has released her own version of Judy Garland’s classic song Over the Rainbow.

All proceeds will go to the NHS. Amanda praised the NHS on Good Morning Britain.

She told Susanna Reid: “Yeah I have used them more than most people. I’ve had to rely on them. We’ve always known the NHS is there and we do take it for granted and I think it’s wonderful how we are shining a light on them.”

What do you see in Amanda’s knee? Share your opinion with us on our Facebook page @EntertainmentDailyFix.