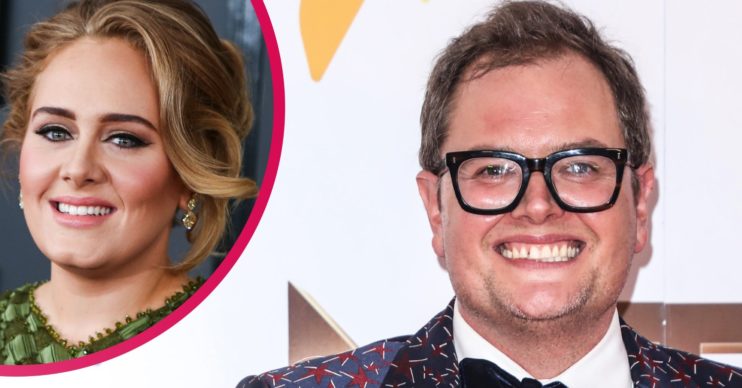 Alan Carr has revealed that close friend Adele has inspired him to lose weight.

The chatshow host and comedian, 44, took to Instagram to highlight a cancer charity.

But it was his chiselled jawline that many fans noticed first.

I don’t know if you know, but next month is Childhood Cancer Awareness Month and I’m proud patron of Neuroblastoma Uk and you can buy these snazzy gold ribbons, pins and bracelets from their website www.neuroblastoma.org.uk to help their fight. Be warned they also have t-shirts coming out which I WILL be modelling in a post very soon. If you can help (and I know it’s tough at the moment!!) we would be so grateful ❤️ #goingforgold #CCAM @neuroblastomaUK

What did Alan’s fans say?

The Chattyman host took to Instagram to raise awareness of Neuroblastoma UK, but the image he used highlighted his weight loss.

Many of his 884,000 followers thanked him for his charity drive.

They also commented on how he looked.

“Not sure what you’ve done, but you look so young,” one said.

Another wrote: “Alan you look amazing.”

Finally, another fan said: “Oh my goodness, lockdown suits you.”

How did Alan lose the weight?

In an interview with The Sun, Alan shared how he had lost the weight.

He also explained that pal Adele inspired him to change his lifestyle.

Earlier this year, Alan revealed the reason he quit Twitter.

“It’s just something I thought that when I started was very fun. It felt like a bit like a community,” he said on Good Morning Britain.

“But then you moan, you moan and moan and it all just got like Speaker’s Corner towards the end. Everyone was just moaning.

“And I worked for four years in a call centre so my days to listening people moaning are well over.”

Singer Adele, 32, wowed the world in early August when she shared pictures that showed off her own seven-stone weight loss.

The Hello hitmaker has credited self-help book Untamed, Stop Pleasing, Start Living, by Glennon Doyle, for turning her life around.

Read more: How much weight has Adele lost? Diet and exercise secrets revealed

She said on Instagram: “If you’re ready – this book will shake your brain and make your soul scream.

“I am so ready for myself after reading this book!”