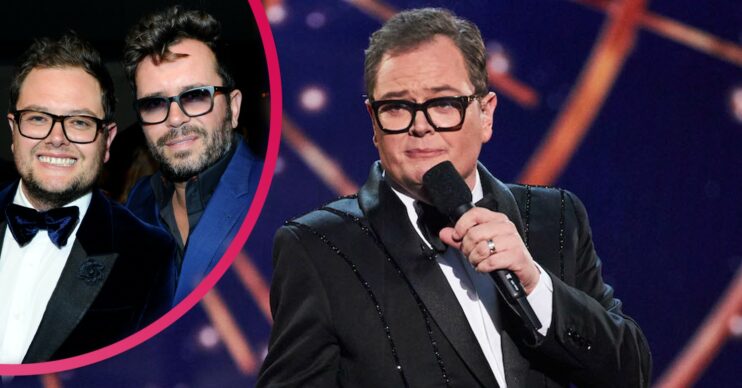 Paul is going through a very rough patch right now

The comedian, 45, hosts the annual Royal Variety Performance this weekend, and he’s now spoken out about his festive schedule.

What did Alan Carr say about Christmas with husband Paul?

Alan is hosting the shindig for the very first time after performing on the show twice before.

He joins the likes of Peter Kay, David Walliams, Cilla Black, Bob Monkhouse and other legends to have hosted the show.

Read more: Alan Carr’s husband ‘to have holes drilled in skull in operation before Christmas’

But when it comes to Christmas itself, Alan has very specific plans.

“Last year I had booked a lovely place in London and we were all going to get dressed up but of course that had to be cancelled.

“I just want to make it extra special as I really missed not being with my family last time.”

What is happening to Paul, husband of Alan Carr?

Alan’s Christmas wishes come after husband Paul revealed that he’s set to have a major operation before Christmas.

He said on Instagram that he’s suffering from a ‘chronic subdural hematoma’.

Doctors, he said, have to drill two small holes in his skull in order to drain fluid.

Paul has also been told to expect a prison sentence by a judge after a drink-driving incident in October.

And, on Instagram once again, the 50-year-old – who married Alan in 2018 – admitted: “I’m feeling broken at the moment and I’m trying not to cry while recording these messages.”

What else will happen at the Royal Variety Performance?

When it comes to The Royal Variety Performance, viewers can expect the likes of Rod Stewart, Ed Sheeran, James Blunt and a host of other stars.

The Duke and Duchess of Cambridge will also be in attendance.

Read more: Husband of Alan Carr told to ‘prepare himself for prison sentence’ after drunk-driving crash with police car

Alan says: “No, I’ve never met them before so that was really exciting.

“When they chatted to me afterwards I got the impression they had really enjoyed it and they were really nice and I was having a laugh with them.

The Royal Variety Performance is on Sunday December 19 at 7.30pm on ITV