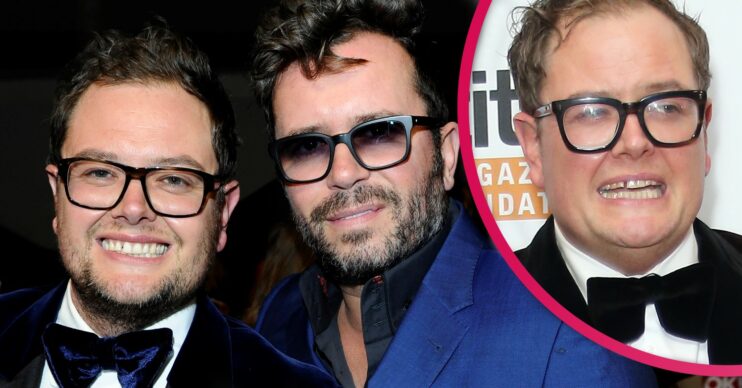 The husband of Alan Carr has revealed he needs holes drilled into his skull in an operation before Christmas.

Paul Drayton, who married comedian Alan in 2018, opened up about the procedure on social media.

He explained he’ll be off social media for a while as he prepares to undergo the surgery.

What did Alan Carr’s husband say?

According to the Daily Star, Paul, 50, said: “I have a chronic subdural hematoma.

“They have to drill two small holes to drain it. Hopefully in the next few days.”

Paul then said: “I won’t be on here for a while but will read all your messages as it gives me comfort and peace.”

Meanwhile, in a video shared to his Instagram Stories, Paul admitted he was feeling “broken”.

He said: “I’m feeling broken at the moment and I’m trying not to cry while recording these messages.

“I hope you’re all well and we can look forward to a better two thousand and twenty two.”

Paul’s problem was reportedly identified after he booked an appointment with his doctor following a fall from a horse.

ED! has contacted reps for Paul for further comment.

Meanwhile, it comes after it was revealed that Paul could face prison for drink-driving charges.

He became involved in the accident in October in West Sussex.

According to reports, Paul was spotted by police swerving along the road before he was pulled over.

He reportedly tested four times over the legal limit.

Read more: Husband of Alan Carr told to ‘prepare himself for prison sentence’ after drunk-driving crash with police car

He was told by the judge to “prepare for a prison sentence”.

Paul was freed on unconditional bail until January 26, 2022, as well as being disqualified from driving.