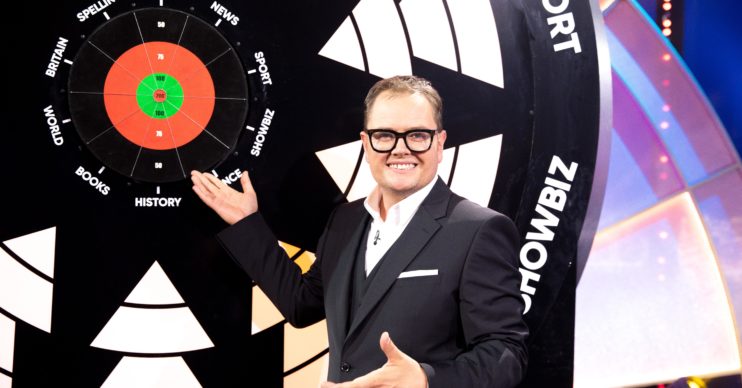 They questioned the change of format

Viewers of Alan Carr’s Epic Gameshow were left disappointed over last night’s Bullseye remake, which some viewers felt didn’t live up to the original.

The ITV Saturday night show has revisited classic gameshows every week, with 80s favourite Bullseye as the latest offering.

The show hosted by Chatty Man host Alan Carr has revamped classic gameshows including The Price Is Right and Play Your Cards Right. However, viewers were left disappointed at the Bullseye remake.

Tv 📺 watched #EpicGameshow #Bullseye 🎯 what rubbish ? What an insult ? No professional player for charity ? Alan’s World when was that ever a subject? 4 boards at the end , what was that about ? Its was 101 or more in 6 darts . But better prizes than when Dave Spikey did it ? pic.twitter.com/Dq0WBz3081

If you thought that was ‘good’, you really aren’t a true Bullseye fan. #Bullseye #EpicGameshow

One viewer called out why Bullseye was the only show that had been changed. They said: “What a crock of [bleep] why mess with bullseye? But none of the others?”

Another agreed: “Why only two pairs? You’ve ruined a great game show again.”

A third said: “Blimey, Bullseye Epic Gameshow was truly awful on every level. The original series was simple, without hype.”

Some Epic Gameshow viewers want Bullseye to be a permanent fixture

Not all viewers disliked the new format though. For some, it still brought back nostalgic memories and viewers have called for it to come back for good.

One viewer tweeted: “Have really enjoyed watching Epic Gameshow over last few weeks. Thanks to ITV and Alan Carr for bringing the old shows back with the family. Hope there is another season next year.”

Another shared: “Alan Carr even makes Bullseye entertaining, it used to be the most boring Sunday night show but this updated version is good!”

A third said: “You Can’t Beat a Bit it of Bully. Jim Bowen would be Super Smashing Great and proud of that show.”

Bullseye used to be a Sunday night classic, and fans have previously called for other gameshow favourites to come back permanently.

Another commented: “I’ve always loved The Price is Right. Can we have a full series please? Alan Carr is perfect for this.“