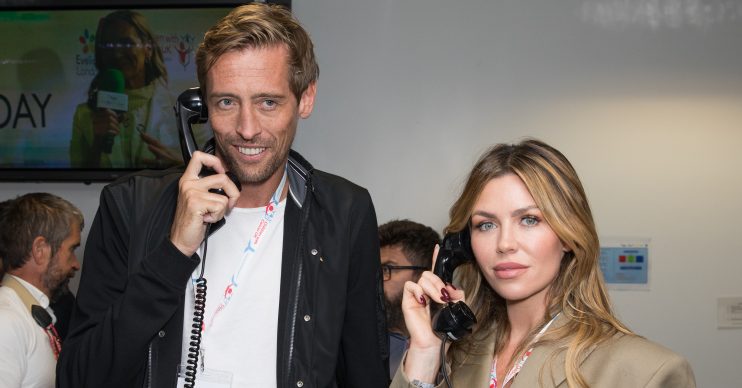 They recently became parents for the fourth time, but Abbey Clancy and Peter Crouch left the kids at home as they headed to London today (September 11).

The pair were taking part in an event that paid tribute to the victims of the 9/11 terror attacks. The annual BGC Charity Day in Canary Wharf sees celebrities join forces to close stock market deals and raise cash for charity.

The event remembers BGC’s 658 colleagues and the 61 Eurobrokers employees who died in the World Trade Center attacks.

Today marks the 18th anniversary of the attacks, which took place in New York on September 11 2001.

Abbey sauntered onto the trading floor looking ready for business in ripped jeans and a belted khaki jacket.

The model perched on the edge of a desk while she closed her deal over the phone. Former footballer Peter dressed down in dark jeans and a white T-shirt.

And the couple were in good company at the event – Prince Harry also attended and helped close a £1bn deal.

BGC’s Ryder Brown revealed: “I thought he was excellent. It was very nerve-wracking but he handled the pressure well and closed the trade.”

Prince Harry on top form on the trading floor. Talking cricket between trades, he joked “It was great to see a ginger almost win us the Ashes” @BGCCharityDay #PrinceHarry pic.twitter.com/22fWnOlA75

The BGC charity day wasn’t Abbey’s only trip into the office this week.

Read more: Una Healy on the “hell” of her split from Ben Foden

The day before she shared a picture of herself in a boardroom.

The busy new mum only gave birth to son Jack in June. She is also mum to Sophie, Liberty and Johnny.