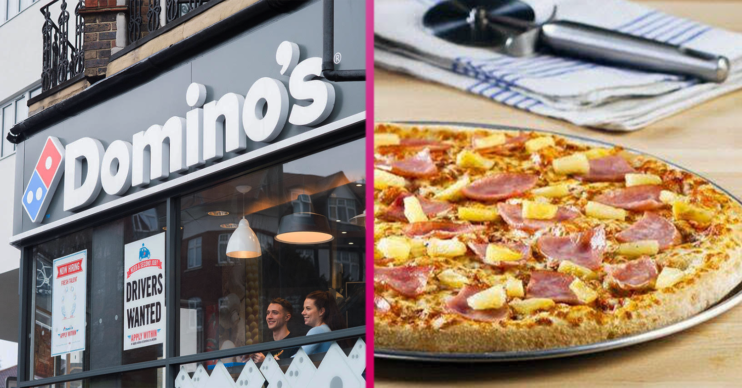 No more pineapple pizzas for a while…

After KFC and Burger King reopened some stores for delivery only, Domino’s has revealed its lockdown measures.

The pizza chain has revealed it has axed a number of favourites from the menu.

In response to the coronavirus pandemic, it’ll be delivering just seven of its pizzas for the foreseeable future.

A note on the website advised: “Sorry if your favourite is unavailable. We are temporarily running a simplified menu.”

The Hawaiian – a pizza topped with ham and pineapple – is one of the favourites that’s been taken off the menu.

And it’s fair to say fans of the pizza are disgusted.

One tweeted: “Was going to get a Domino’s but it’s running a reduced menu and has taken pineapple away, so what’s the point.”

Another said: “Didn’t know Domino’s are only doing a limited menu. Fair enough, but they’ve taken away pineapple?! Now I’m going to have to cook my own to add to the pizza when it arrives.”

“Hawaiian is the best,” wailed another.

Another said: ” No pineapple option. But I have pineapple at home. I will not be thwarted.”

“The local Domino’s haven’t got any pineapple and to be honest I’m f**king outraged,” another raged.

First it took away our football, then it closed down our pubs. Now due to the coronavirus Domino’s will no longer offer pineapple on its pizza.

Vegetarians have a much more limited choice.

All veggies can now order is the Original Cheese & Tomato and the Vegi Supreme.

However, pizzas can still be customised, with a more limited array of toppings.

One fan called the news “depressing”.

“The virus has gone too far!”

“First it took away our football, then it closed down our pubs. Now due to the coronavirus Domino’s will no longer offer pineapple on its pizza. This damn virus has finally gone too far!” another said.

I love pineapple in pizza. Domino’s had it but removed that pizza from their menu😭😭😭

Last week, Domino’s revealed it was planning on giving away £1 million worth of pizza to its “NHS champions”.

The news was announced on Twitter, with the chain revealing it was planning on giving away £1m worth of pizza every week this month.

In total, Domino’s said £4m worth of pizza will be given away.