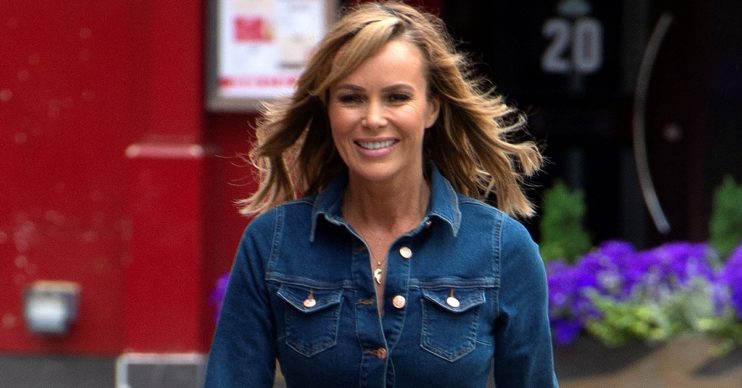 Amanda Holden has finally revealed the secret to her flawless figure, and it’s not just a hardcore exercise regime, good diet and excellent genes.

The Britain’s Got Talent judge regularly wows in revealing bodycon dresses but Amanda has a wardrobe secret that helps give her toned figure that extra boost.

Amanda, who is known for her nipped-in waist and washboard abs, swears by wearing a pair of bodyshaping and smoothing Spanx under her fabulous frocks.

While chatting to presenter Emma Willis on Instagram Live, Amanda opened up about what goes on behind the scenes at Britain’s Got Talent.

Talking about how happy she was when Alesha Dixon joined the panel, alongside Amanda, Simon Cowell and David Walliams, she said how nice it was to have another girl to bond with.

Amanda went on to reveal their behind the scenes secrets, finally letting us all in on the wardrobe secret that keeps her and Alesha looking so amazing in their showstopping outfits.

“We wear slippers under the desk, we eat food, we wear Spanx,” Amanda revealed to Emma.

“It’s so nice to have another girl there alongside me.”

The Heart Radio presenter went on to talk about how grateful she is for the show, admitting it’s helped her pay her mortgage.

Amanda also spoke about the relationship between her, Alesha, Simon and David, saying it’s ‘too real’ to be faked for the show and explained how ‘lucky’ she feels to be part of the panel.

“When David came he pushes all of Simon’s buttons, and we got to see that and the relationship between them has lifted the show,” Amanda explained.

These latest revelations come as Amanda let slip that she knows exactly what she’s doing when she wears boob-flashing outfits on BGT or ‘accidentally’ lets slip a swear word.

“Even though I am really open and very much myself most of the time, it’s a fake circumstance when you’re sitting on a panel and judging,” she told The Sun.

Amanda added: “I’m very aware of myself and what I should say next. Sometimes I pretend I’m not and I’m outrageous, and I’m like, ‘Oh I had no idea I was going to say that’, or my boob pops out, ‘I had no idea that was going to happen!’

“You have circumstances where you know what you’re doing and the situation is always ongoing, so you are always aware.”