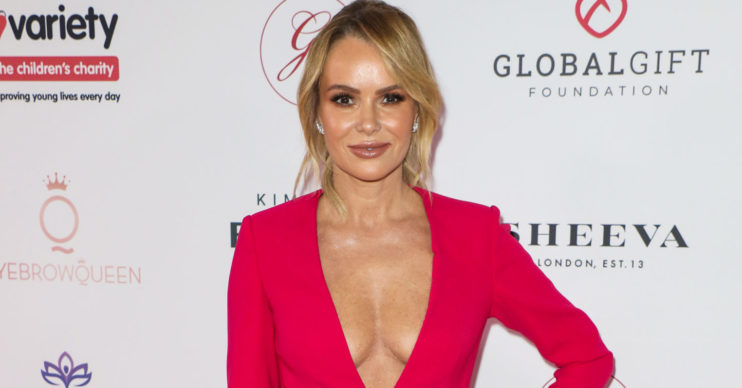 TV and radio host Amanda Holden has long been criticised for her love of barely-there dresses.

Last summer, it was revealed that “family show” Britain’s Got Talent was threatened with an Ofcom investigation over her revealing nude dress.

Amanda, who is a judge on the show, wore a sheer embroidered dress, with just a spider’s web design covering her modesty.

While just last week fans were divided over the “risky” dress she wore on The One Show.

Even Piers Morgan has chimed in, poking fun at Amanda as she uploaded a video of herself mowing the lawn in her wedding dress to Instagram.

He quipped that she was “showing off”.

However, Amanda’s fashion fortunes appear to have had something of a boost with her latest look.

Earlier today (May 13), she uploaded a video of herself strutting into the Heart FM offices, where she hosts the breakfast show alongside Jamie Theakston.

If you’re got it, flaunt it!

And, far from the revealing outfits she wears when she appears on Simon Cowell’s flagship ITV show, Amanda covered up in a demure floral dress.

And her followers were loving it.

“So classy!” said one fan of the dress.

Another declared: “I love this dress.”

“Loving the frock,” a third commented.

“Looking gorgeous as ever Amanda,” said another.

It’s by Warehouse and she revealed it’s available online at Very.co.uk.

However, the £40 dress recently went into the sale and, at £32, it was quickly snapped up!

As a result, it’s sadly sold out.

“Look at that sass!”

However, while fans praised her demure new look, it was apparent that Amanda has lost none of her sass.

Many fans commented on how “sassy” Amanda looked in her video.

“Sassy and classy!” one declared.

“The queen is back!” another follower said.

“Look at that sass!” another commented.

“If you’ve got it, flaunt it,” said another.

“Catwalk queen, you SLAY and I love that dress,” said another.

“You have such an amazing figure – you look so young for your age. Super jealous,” said one die-hard Amanda fan.