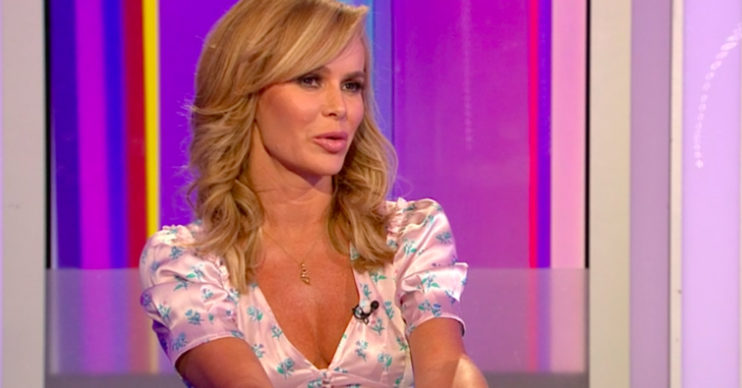 Amanda Holden divides viewers with ‘risky’ dress on The One Show

Her flirty dress left little to the imagination.

Heart Radio presenter and Britain’s Got Talent judge Amanda Holden left viewers stunned with her sexy dress on The One Show.

The figure hugging outfit appears to have left fans divided on Twitter.

Some seem in awe of the flowery number, while others slammed it as “inappropriate”.

One viewer appeared to take particular offence to Amanda wearing the dress pre-watershed.

“Why be so easily offended”

The One Show airs at 7pm, and this viewer described it as a “family show”.

Read more: Katie Price denies she is in a relationship with ‘Dreamboys hunk’

The user tweeted: “#theoneshow Why is Amanda Holden allowed to wear such a revealing dress on The One Show, supposedly a family show?”

Another defended her outfit of choice with: “She’s showing a bit of her body which 50% of people have. Why be so easily offended.”

However, another user appeared just as disgruntled by Amanda’s choice: “Does Amanda Holden understand that The One Show is on under the watershed of 9pm.

“She needs to ask a question to herself, is wearing a dress that is such low cut showing most of her boobs appropriate for that time of evening. It is a dress for a night club not a family show.”

Another vented: “What the hell was Amanda Holden thinking of wearing that risky dress on a family show as The One Show.”

“It is a dress for a night club”

And yet another urged Amanda to ignore the “haters”: “You look perfect for a family show, your dress looks lovely and you look fab!! Don’t listen to the haters, they have nothing better to do.”

She appeared on the popular BBC show to promote her charity single for the NHS.

She also opened up on the hilarious comments recently made by her eight-year-old daughter Hollie.

When speaking about Simon Cowell and partner Lauren Silverman to her some 1.8 Instagram followers, Hollie interjected by saying: “I thought they broke up?”

But Amanda said there’s no truth to it, and called her a “little sausage”.

On The One Show, Amanda joked: “Poor old Hollie. Who quotes an eight-year-old?”

Host Alex Jones joked: “It was just an innocent comment,” to which Amanda agreed with: “Yes. Little sausage.”

What do you make of Amanda’s dress? Share your thoughts with us on our Facebook page @EntertainmentDailyFix.