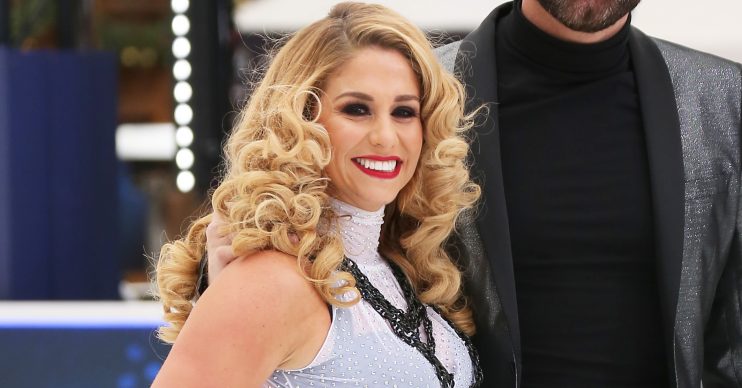 She's gutted to not be skating in January

Alex Murphy has said she’s “heartbroken” that she won’t be taking part in next year’s Dancing On Ice after Michael Barrymore was forced to quit due to an injury.

Michael, 67, withdrew from the skating competition after falling over on the ice and breaking his wrist.

Alex, who was due to be partnered with Michael on the show, has taken to Instagram to express her sadness at not being able to perform with him.

Absolutely heartbroken to have to say that both Michael and I won’t be competing this year. 😢 Michael fell last Friday and he’s such a trooper, but it wasn’t until this week we found out he’d broken his wrist. I’m beyond devastated to not be taking part in the show this year, especially with this gentleman 😢💔

Alongside a snap of herself and Michael, she wrote: “Absolutely heartbroken to have to say that both Michael and I won’t be competing this year.

“Michael fell last Friday and he’s such a trooper, but it wasn’t until this week we found out he’d broken his wrist.”

She added: “I’m beyond devastated to not be taking part in the show this year, especially with this gentleman.”

Many of her followers were gutted and suggested why she couldn’t skate with Michael’s replacement Radzi Chinyanganya.

Jake Quickenden wrote: “Why won’t you skate with the back up?”

We’re really sad to confirm that @michaelbarrymore has had to withdraw from #DancingOnIce due to injury. “I am absolutely devastated,” he said. “I have loved every second of the journey so far with my wonderful dance partner Alex Murphy.” Please join us in wishing him all the best for a speedy recovery. Joining us on the ice will be presenter @iamradzi and his Pro partner @jess_hatfield_skater – welcome on board, guys! Michael and his skating partner @almurph18 will still be taking part in #DancingOnIce at Christmas, this Sunday at 7pm on @itv and @WeAreSTV1.

One fan said: “Please tell me you’ll still be on our screens skating though?” while a third added: “Oh no, do you not get to work with the standby?”

On Wednesday, Michael said in a statement: “Shortly after shooting the Dancing On Ice Christmas Special I took a tumble whilst rehearsing for the January shows.

“I am absolutely devastated; I have loved every second of the journey so far with my wonderful dance partner Alex Murphy and the support from the public has been overwhelming.”

He added: “I shall be in the studio for the first show on Sunday 5th January and hope to make other appearances throughout. I would like to wish the whole of Dancing On Ice 2020 the best of luck.”

Cant believe I’m saying this… but I am officially Dancing on Ice!!!!!!! 😁😁😁😁😁😁 Absolutely cannot wait to skate live on @itv with @jess_hatfield_skater, but we’ll be doing it for the legend @michaelbarrymore who sadly has to withdraw due to injury. Just two weeks to turn myself into a skater… 🤞🏾🤞🏾 @dancingonice heere we come!! #jadzi #dancingonice #itv #live #torvillanddean #Sunday #night #iceskating

Michael’s replacement Radzi added: “I am thrilled and privileged to be part of the Dancing On Ice 2020 cast. I am absolutely gutted for Michael, who is one of my all-time favourite TV presenters, and I wish him a speedy recovery.

“I’ve only got two weeks to get ready to ice skate in front of the nation so I’m looking forward to a Christmas and New Year filled with training on the ice!”