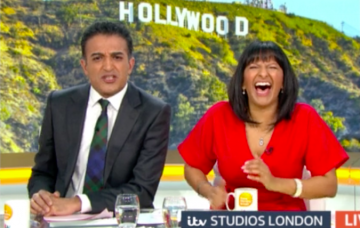 Some viewers said Adil and Richard are sound-alikes

OK, so anything can happen with live TV, but the on-set chaos hit new levels on Friday’s Good Morning Britain when Ross King apparently had no idea who was presenting the show.

The incident took place during a segment on location at Wolfgang Puck’s Californian restaurant.

Ross and the celebrity chef were talking all things Oscars as he prepares to cook for the A-list at the awards do.

Adil, who is stand-in host for Piers Morgan, interrupted the chat to tell the veteran TV star: “I was very lucky, on my 40th birthday a few years ago, I went to Wolfgang’s restaurant in Las Vegas and it was superb, thank you very much. I’m expecting a discount the next time I come.”

Hearing the message through his earpiece, Ross told Wolfgang: “Our host Richard Madeley in London is saying on his 40th birthday he went to your restaurant in Vegas and it was absolutely superb.”

Adding to the confusion, Adil, 44, thought he’d said something else, and looked annoyed as he shouted: “Richard Bacon?!” Still not understanding, Ross replied: “Richard Madeley, I said!”

Sitting beside him, Ranvir Singh couldn’t stop laughing, as she told her co-star: “Richard Madeley!” Shaking his head, Adil told producers: “Richard Madeley? I can’t… Give this guy a monitor, will you?”

Ross apparently didn’t realise his mistake asking ‘Richard’: “How are you doing, pal?” Adil replied: “I am well, but it’s Adil, not Richard.”

Viewers were divided by the “awkward” segment, with one blasting GMB: “Complete car crash TV this morning, especially with Ross King’s Richard Madeley faux pas, switching over to BBC Breakfast…”

Others joked about the confusion, with one tweeting Adil: “That was the funniest thing I’ve seen on Good Morning Britain. Guy was steaming being called Richard Madeley 😂😂😂.”

A second laughed: “Not Richard Madeley then?! Does Ross King realise yet? 🤣.” A third added: “Richard Madeley looks different today?!” One more wrote: “You and @ranvir01 are a good combo… I’m also impressed with your Richard Madeley impression as is @TheRossKing 😂.”

What did you make of this mistake? Leave us a comment on our Facebook page @EntertainmentDailyFix and let us know what you think.