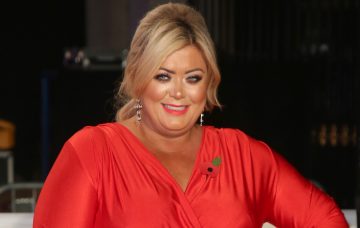 She sang to DJ Naughty Boy

Gemma Collins has shown off her incredible singing voice backstage at the Brit Awards.

The Dancing On Ice star posted a video to her Instagram on Thursday showing herself breaking into a song as DJ Naughty Boy, whose real name is Shahid Khan, holds the trail of her red dress.

In the clip, Gemma is seen holding her high heels as she wondered down a corridor, which appeared to be at the Brits, after singing one of Naughty Boy’s tracks.

After she showcases her vocals, Naughty Boy told her: “You just touched my heart and not many people have.”

Gemma said: “Come on then,” as she begins walking away clutching her shoes.

Shahid is seen holding the train of her red dress.

It comes after some people mocked Gemma’s extravagant outfit for the awards show.

The former TOWIE star, who was at the show with Lorraine Kelly’s showbiz presenter Dan Wootton, wore an astonishing red dress paired with a matching hat.

Speaking about her look in a video shared to her Instagram Stories, Gemma said: “I am just having my outfit made for the BRITs tonight. It’s all happening…

But her bold look didn’t go down well with some people, who branded the outfit “daft”.

One wrote: “What’s that on your head, it looks daft,” while another blasted: “Looks lovely the red but the hat ffs.”

A third added: “Wouldn’t want to be sat behind her with that hat on.”

Of course, many fans loved Gemma’s look with one person gushing: “Gemma, absolutely love how extra you are! This hat and outfit… you look amazing.”

O what a night this is going to me @brits @danwootton 😝❤️

Another commented: “Go big or go home and that is a wonderful big beautiful outfit.”

Gemma, 38, was voted off Dancing On Ice earlier this month after failing to impress with her performance.

As well as making headlines every week thanks to her antics on the show, Gemma also lost two-and-a-half stone.

However, the reality TV star has decided to quit dieting as she’s decided to love her body for what it is.

Stop wishing for other people’s bodies. Find peace in your own. Just eat food. Eat real food,be active and live your LIFE. Forget all the diet and weight loss NONSENSE. It’s really just that… NONSENSE. 💗💫💗 spreading LOVE and POSITIVITY

She wrote on Instagram: “Stop wishing for other people’s bodies. Find peace in your own. Just eat food. Eat real food, be active and live your LIFE.