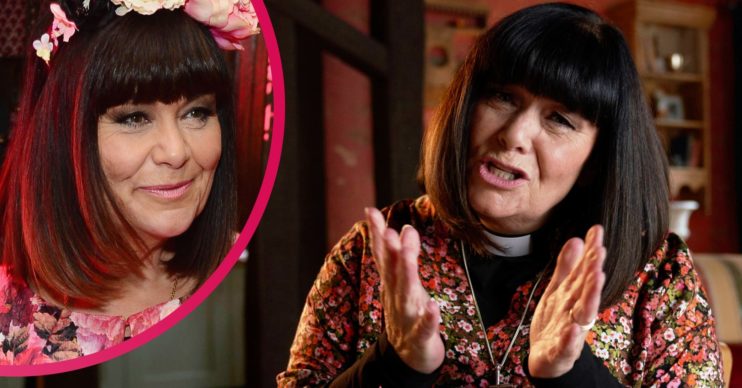 The vicar urged people to support the BLM movement

In scenes at the end of Monday’s (December 14) episode, the vicar got down on one knee as she urged people to support Black Lives Matter in their daily lives.

What happened in the Vicar of Dibley BLM episode?

In the episode, Owen Newitt (formerly played by the late Roger Lloyd-Pack) remained behind the camera as he silently filmed Geraldine walking through the village and recording a message for her parishioners.

Towards the end, she sat on a bench and said seriously: “Right, down to business. Like a lot of people all over the world, this last week I’ve been thinking about this Black Lives Matter thing and the horror show that was the murder of George Floyd.

“Now, this is tricky for us in Dibley because we’re not the most diverse community. But you know, I don’t think it matters where you’re from – I think it matters that you do something about it, because Jesus would, wouldn’t he?

Until all lives matter the same, we’re doing something very wrong.

“So I think we need to focus on justice for a huge chunk of our countrymen and women who seem to have a very bad, weird deal from the day they’re born!

“So follow me, I think that in Dibley, perhaps we should think about taking down some of these old notices, like this, and that…”

Read more: Roald & Beatrix starring Dawn French: When’s it on? How can I watch it?

Ripping the unimportant notices down, she added: “And perhaps, we put up one like this, instead?”

The programme then showed Geraldine taking a knee before her poster, which read, ‘Black Lives Matter’.

It follows reports of complaints from viewers.

The first installment in the special lockdown series annoyed those watching at home when it mentioned characters played by actors who have died since the show was last on.