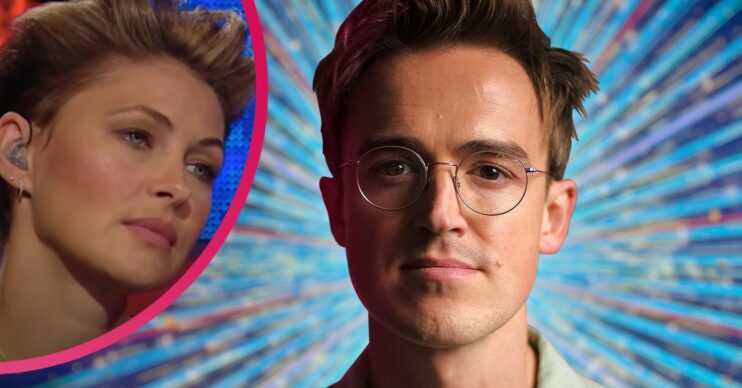 The McFly star is already caused trouble behind the scenes

The McFly star is one of the stars to be preparing to hit the Strictly dancefloor later this month.

Others joining him include Sara Davies, Nina Wadia and AJ Odudu, with whom Tom shares a famous friend in common.

One of the biggest rules bosses have is that contestants have to keep their role on the show secret until the official announcement.

However, it turns out Tom failed to adhere to the rule – and he blames Big Brother presenter Emma Willis!

He told The Sun: “Me and AJ told each other we were [doing the show] because we both have a mutual friend. Emma Willis is our mutual friend.

“I think it was Emma told me, and I think Emma probably told her, so you could blame Emma Willis.

“But we were sat next to each other for about an hour and neither of us said anything but I think we both knew that we both knew and we confided in each other.”

Tom went on to confesses that he has dreamed of doing Strictly for a decade.

He said his desire began after watching his bandmate Harry Judd be crowned the winner in 2011.

Things are looking good for Tom too, with Betfair revealing the McFly is favourite to win with odds of 4/1.

Tom’s other bandmates have also been pretty busy on the reality show circuit.

Dougie Poynter was crowned King of the Jungle in 2011.

Who else is part of the line-up this year?

Meanwhile, the 19th series of Strictly will see 15 celebrities take to the ballroom floor.

Former professional Anton Du Beke will also debut on the judging panel when the show returns.