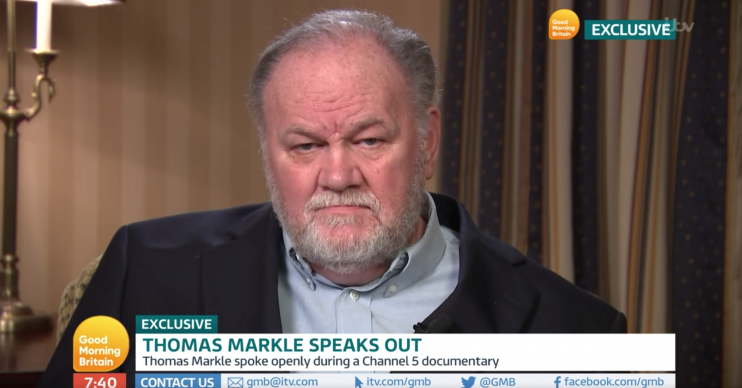 He insists he wants to heal family rift

Thomas Markle, the father of the Duchess of Sussex Meghan Markle, insisted he just wants to ‘get his family back together’ in a live interview on Good Morning Britain today.

The 75-year-old told TV hosts Piers Morgan and Susanna Reid that tensions between himself, Meghan and her husband Prince Harry should be worked out in private, rather than in the press – but also said he had “trouble buying” the idea his daughter had suffered racist treatment from the press.

“Making this a big drama for the world every day is ridiculous,” he said when speaking about the coverage that Meghan endures.

Thomas, who noted he has been in contact with either Harry or Meghan, said that while he loved his daughter, he found their decision to step away from royal duties as “very confusing” and wondered whether the problems between them were merely a “misunderstanding that should’ve been worked out”.

However, he also reckons either one of the couple should be making the effort to come to him after he has sent them letters to which he has had no response.

Man up and fly down and see me.

Reflecting on how he wasn’t in attendance for their May 2018 wedding, Thomas admitted he was “sad” to miss out – but was grateful to Prince Charles for walking Meghan down the aisle.

“The ceremony was beautiful and I’m thankful and honoured for Charles – but I wished it had been me [to accompany the bride],” he said.

Nonetheless, the retired TV production worker also believes Harry should have been more traditional with his proposal and spoke to Thomas in person when planning their nuptials, rather than over the phone.

He told Piers and Susanna: “In hindsight, I think a royal who has a plane whenever he wants it could have come to Mexico to ask for her hand from me.”

Rejecting the thought that Meghan is attacked without justification by newspapers and magazines – or possibly with racist intent – Thomas claimed: “I’m having trouble buying that.

“I think England is far more liberal than the United States with race.”

Ruling out the possibility of Meghan being bullied by the media, Thomas also said he thinks criticism levelled against her is “justified”.

“Have a family member ghost you and see how you feel,” he reasoned.

Thomas began his interview in uncompromising fashion by suggesting Harry and Meghan’s decision to step away from royal duties was both “embarrassing” and ‘hurtful’ to the Queen.

But he also said that the upside to imminent legal action over the publication of a letter in a Sunday tabloid was that it could help bring them all back together in one place.

“If it comes to meeting them in a courtroom, that’s great – at least I finally get to see them,” Thomas – who has never met baby grandson Archie in person – suggested.

And asked what he would say to both Meghan and Harry directly, if they were watching the interview, Thomas urged both to open lines of communication with him.

“I’d say I love you and let’s work this out,” he said about his message for Meghan.

“We should get together.”

Admitting it was “possible” that time could go against him at 75, Thomas also challenged Harry to brave a meeting with him.

“Man up and fly down and see me,” Thomas smiled.

He continued: “I’m not looking for pity. What’s most important to me is getting my family back together and the truth be told, that’s all. That’s all I’m looking for.”

‘I don’t think that she is being bullied in any way or any shape because of racism.’

Thomas Markle says the negative coverage of his daughter Meghan is not racism. pic.twitter.com/AFEV10J8zf