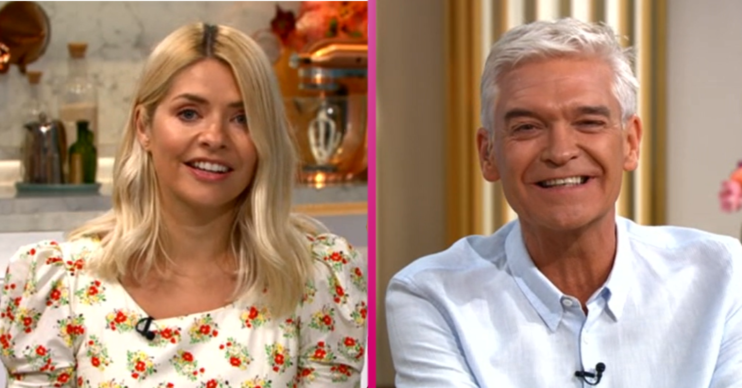 This Morning waved Phil and Holly off on their summer break today and some viewers watching at home were in tears.

Phillip Schofield and Holly Willoughby usually host This Morning Monday to Thursday, with Eamonn Holmes and Ruth Langsford taking over on Fridays.

However, to celebrate the ‘end of term’ Eamonn and Ruth took the day off and Phil and Holly did an extra stint before they head off on their six week summer break.

Holly and Phil: excited for their holidays

It’s fair to say the pair were giddy with excitement as they began the show driving into the studios in an ice cream van.

Alison Hammond was on hand to dish out the sweet treats throughout the morning.

They played Spin to Win twice, with people answering the phone AND getting the phrase right on both occasions, as well as winning top prizes.

Interviews included an awkward chat with new dad Bernie Ecclestone, who said he didn’t change nappies as “that’s what wives are for”.

They also spoke to Rupert Penry-Jones about his new movie, and Paloma Faith and Danny Jones about The Voice: Kids, which begins this weekend.

Deirdre hosted a phone-in about lockdown and also took a moment to thank Holly and Phil for their hard work.

“You have been so brilliant,” she told them. “You’ve been so cheerful, you’ve held it all together, you’ve been brilliant.”

As if that wasn’t enough for the bumper show, they sampled a huge amount of wine – some of which was eye-wateringly expensive – and had John Torode in the studio to cook them luxury lobster rolls.

Holly and Phil and their This Morning best bits

At the end of the show, Phil and Holly had a look back over some of their best bits throughout the past year.

As well as the funny bits, they also included the serious parts, such as Phil’s coming out chat, and Alison Hammond’s heart-wrenching response to the murder of Floyd George.

They ended the show thanking everyone for their hard work and also the viewers at home for watching.

Read more: Fans beg Holly Willoughby to tell them how she does her hair

Phillip then turned to Holly and said: “Hopefully, when we come back in September, I can give you a bloody hug.”

Holly was a bit emotional as she responded: “I hope so. That would be really nice, I really look forward to it.”

She continued: “All that remains for us to say is have the most wonderful summer.”

“Eamonn and Ruth will be here to keep you company from Monday,” Phillip confirmed.

Those watching at home found themselves a little overcome with emotion too.

Well done @Schofe & @hollywills for helping us through the tough times! #ThisMorning

The end of #ThisMorning. I’m not crying, you’re crying. pic.twitter.com/naZvcjJNLH

@thismorning @Schofe @hollywills #ThisMorning #itv I am in tears. Well done for keeping us going you’re all amazing. THANKYOU

Going to miss these two thank you for all you’ve both done in lockdown I wouldn’t have coped without you both you are literally my lifesavers thank you for letting me smile again #thismorning #phillandholly #kingandqueenofdaytime @Schofe @hollywills @thismorning pic.twitter.com/E3ALi8jku3

Just catching up on @thismorning I’m crying!!!! So emosh!! @hollywills and @Schofe WE LOVE YOU AND I MISS YOU ALREADY! Thankyou for being there Monday to Thursday keeping us all sane! #thismorning

Will Holly and Phil be back on This Morning?

However, some wondered if it was a bit over the top – and if perhaps there was more to it.

With rumours Holly and Phil could be replaced, there were questions over whether it was their last show ever…

I've never seen an *end of term* show before, but this very much has the feel of being quite a bit more than just *end of term* …

I know it’s a bit dramatic…. There only going on a break. #ThisMorning

Are you counting down until Holly and Phil return? Leave us a comment on our Facebook page @EntertainmentDailyFix and let us know what you think of this story.