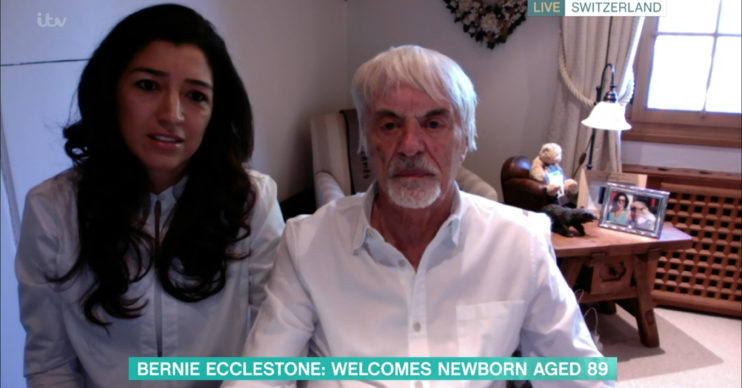 This Morning: Bernie Ecclestone causes outrage as he says he doesn’t change nappies

This Morning fans were left outraged today (Friday, July 10) after Bernie Ecclestone said he didn’t change the nappies of his newborn son, Ace.

But it wasn’t the fact he didn’t do the task, it was the comment he made alongside it: “That’s what wives are for” that sent Twitter into meltdown.

Hosts Phillip Schofield and Holly Willoughby welcomed Bernie and his wife Fabiana Flosi to This Morning via video link from Switzerland to talk about their new arrival.

The interview came across a little stilted and awkward as the presenters’ questions were met with short answers.

Bernie Ecclestone wasn’t at the birth of his son

When talking about the birth, 89-year-old Bernie revealed he wasn’t there: “I’m not a doctor,” he said. Phillip argued a lot of men liked to be there for the moment. Bernie replied: “I don’t know what there is to see, I’d rather watch a video.”

Phillip asked if he had to be careful, given current circumstances in the world. “Careful about what?” Bernie responded.

Holly went on to discuss the Forumla One magnate’s age, saying: “As a couple, I imagine that was a conversation that you both had. How do you feel about that?”

“About the conversation?” Bernie queried.

“Well, how do you feel about being a father much later in life?” Holly clarified.

Bernie said: “I wanted to a father. Fabiana really wanted to be a mum as well and I didn’t realise that being a father, how good and interesting it is to your life. Well, my life anyway, I don’t know about anyone elses’.”

Phil then reminded him he already had three daughters, but Bernie said he now has a lot more time to spend with his son.

Bernie Ecclestone reveals on This Morning he doesn’t change nappies

Holly asked how hands on Bernie is as a dad and Fabiana said: “He helps.”

Phil questioned whether he did the nappies or night-time feeds, to which Bernie said: “No.

Holly sucked her breath in and Phil told him that would be “controversial” and Bernie responded that “most things I say seem to be, it’s how people take them.”

Did I just hear that man on #thismorning say “that’s what wife’s are for?!”

#BernieEcclestone #ThisMorning ‘that’s what wives are for’ when asked about changing nappies! This prehistoric codger has no place having kids for his attitude alone, let alone his age!

Bernie Ecclestone “that’s what wives are for” #thismorning why are you putting Dinosaurs with attitudes from the Stone Age on our screens?

Oh wow ‘that’s what a wife is for’ #thismorning

The interview continued and they discussed having another child with Bernie confirming he would like a sibling for Ace.

Talk turned to Formula One and the lack of black people working within the industry.

Bernie insisted anyone who is “talented enough to do a job that is available in Formula One would be more than welcome”.

Viewers felt the whole interview was a ‘car crash’ and ‘awkward’.

That #thismorning interview with Bernie was a tad uncomfortable pic.twitter.com/f0ioDrAhRZ

That whole interview was a disaster from start to end #ThisMorning https://t.co/aAoELP5iqX

Ooh toe curling stuff from #BernieEcclestone on #thismorning! Feel sorry for his wife (if I didn’t before)

Bernie Ecclestone interview on #ThisMorning was a car crash (no pun intended). How do you go straight from newborn baby to racism?? … I’ll be hiding behind the sofa til tomorrow

Omg that interview was the worst. I cringed all the way through #BernieEcclestone #thismorning