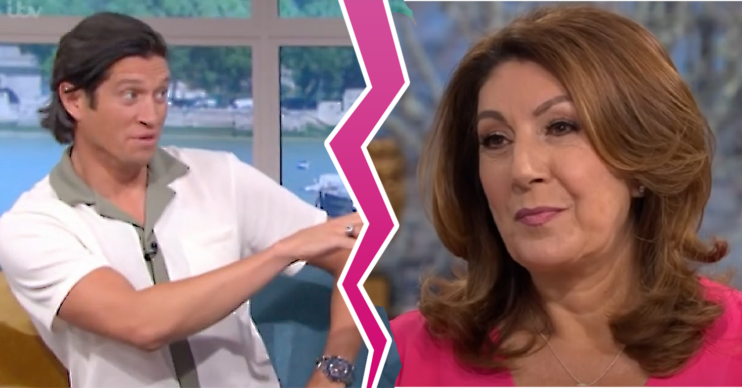 She's a national al treasure and Vernon knows it!

This Morning host Vernon Kay rushed to the defence of national treasure Jane McDonald on the show earlier today (August 4).

Talking head Tom Swarbrick joined Vernon and Rochelle Humes for the Morning View segment, where they discussed the day’s news.

However, talk soon turned to Jane and a story about a man who had her CD stuck repeat in his car.

The This Morning host revealed he was being “driven round the bend” after his car stereo broke.

As a result, the CD got stuck and it would only play one song of Jane’s.

As Rochelle continued to explain John was being “driven around the bend”, Tom chipped in with his dig at national treasure Jane.

“Scrap the car,” he said, laughing.

Read more: Jane McDonald’s shock confession about her diet and ‘falling off the wagon’

“No, sorry that’s not fair of me,” he added, clearly realising the error of his ways.

Vernon wasn’t letting him get away with insulting the iconic Jane, though.

He hit back and issued a warning to Tom, joking: “Oh, you are done for. It’s game over.”

However, This Morning fans appeared to be on the side of Tom on Twitter.

One commented: “Yup scrap the car!”

Another agreed and said: “Sell the car!!”

It’s a good job Jane has an army of loyal fans to fall back on.

Earlier today she revealed that she had felt “overwhelmed” by the support offered to her by fans on the release of her last album.

Jane revealed that she had written the album at a “difficult time” as she was stuck at home during the pandemic.