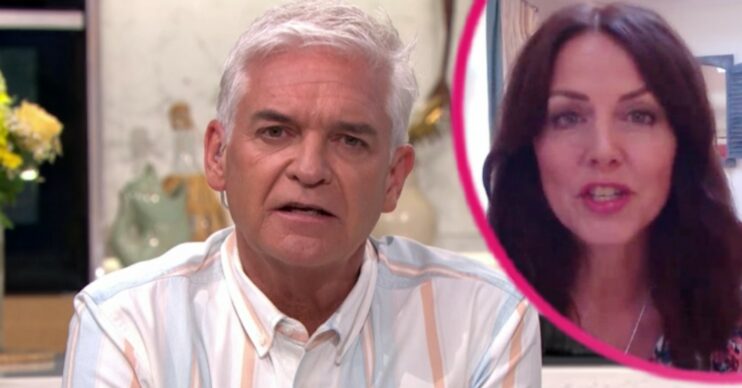 This Morning: Phillip Schofield criticised for ‘talking over’ Beverley Turner as she makes show return

Bev previously came to blows with Dermot O'Leary on the show

This Morning host Phillip Schofield has been criticised for ‘talking over’ Beverley Turner during today’s show (June 16).

The 59-year-old presenter caught the attention of viewers following a discussion with Bev on coronavirus vaccines in care homes.

During the debate, Beverley made it clear that she didn’t agree with the proposals for the jab to be made compulsory for care home workers.

She said: “We know that care homes, it’s an industry that appeals to younger workers, they aren’t often graduates.

“They might be seen as some of the quieter voices in society who may not feel they can stand up for their rights.

“We still have a human right in this country which is for personal autonomy and informed bodily consent, so it’s a very sad day for those young people who might just want to wait a little while, who just might want to say ‘Without any long-term data for these vaccinations, can I please just wait?”

The group later went on to discuss the idea of playing non-contact sports at weddings.

However, viewers noticed Phillip interrupted Beverley on a handful of occasions.

How did viewers react to Phillip Schofield?

Taking to Twitter, one wrote: “Phil talking over Bev Turner like he was bored. Whilst I can relate that was rude #ThisMorning.”

A second said: “Phil literally just spoke over Bev to tell a story about himself.

“I mean it’s Bev so I don’t mind. But the RUDENESS of that man #ThisMorning.”

The RUDENESS of that man

In addition, a third agreed: “He has become too big for his boots. He’s over exposed. It’s all me me me!”

Meanwhile, others were disappointed over Beverley’s appearance.

It comes after the star clashed with Dermot O’Leary on the show last month.

Phil talking over Bev Turner like he was bored. Whilst I can relate that was rude #ThisMorning

In fact, it was even rumoured Bev was ‘banned’ from going back on This Morning.

Commenting on her return, one shared: “#ThisMorning can you get actual scientists to talk about the vaccine? Because this Bev clearly doesn’t understand how vaccines work.”

Another added: “Why #ThisMorning keep having Beverley anti vax Turner on is beyond me.

Read more: Who is This Morning guest Beverley Turner and why has she caused controversy?

“ITV should be encouraging people to get the vaccine instead of having her on telling people not to get it.”

A third tweeted: “They’ve brought back Bev for the outrage and the views they’ll get.”

“Bev is on talking about vaccines,” a fourth shared, adding: “Well this is going to go well.”