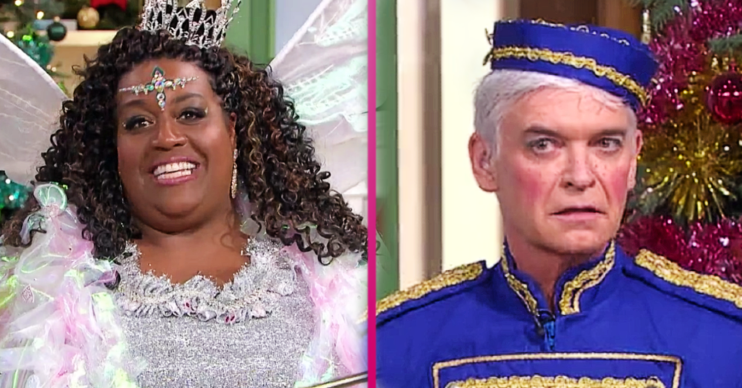 Phillip took it in good humour

This Morning had its 2020 panto today and one moment saw Alison Hammond make a cheeky joke about Phillip Schofield‘s sexuality.

Alison, 45, made the quip during the show’s annual Christmas panto on Friday (December 11).

But it wasn’t long until viewers were in hysterics at the quip.

What happened on the This Morning panto 2020?

The show’s hilariously cheesy panto was a socially-distanced version of Cinderella.

Alison dressed up as the Fairy Godmother, while Phillip and co-host Holly Willoughby were Buttons and Cinderella.

When Alison gave them their costumes so they could go to the ball, it was revealed that Cinders was missing a shoe.

Holly said: “Thank you Fairy Godmother, this is everything I could possibly have dreamed of, but hold on… Wait a minute, I’m missing a shoe.”

When Alison suggested that they check the fashion cupboard, she then said: “I’m not the only fairy on this show, you know.”

How did Phillip react?

Cameras then panned to Phillip, who gave a jokingly snide look to Alison.

Phillip famously came out as gay at the start of the year.

How did viewers react to the joke?

It wasn’t long before viewers took to Twitter to express their delight in the cheeky gag and Phil’s reaction.

One Twitter user said: “That was the funniest thing I’ve seen on TV for so long!!

“@Schofe is a great sport.”

“I’m not the only fairy on this show, you know!”
*cut to Phillip Schofield narrowing his eyes.* Genius. #ThisMorning

Then to “tinker bell”

#ThisMorning Alison: “I’m not the only fairy on this show you know”…camera cuts to Phil hahaha 🤣🤣🤣

Another said: “Alison: ‘I’m not the only fairy on this show you know’…camera cuts to Phil hahaha.”

“‘I’m not the only fairy on this show, you know!’ *cut to Phillip Schofield narrowing his eyes.* Genius. #ThisMorning,” a third said.