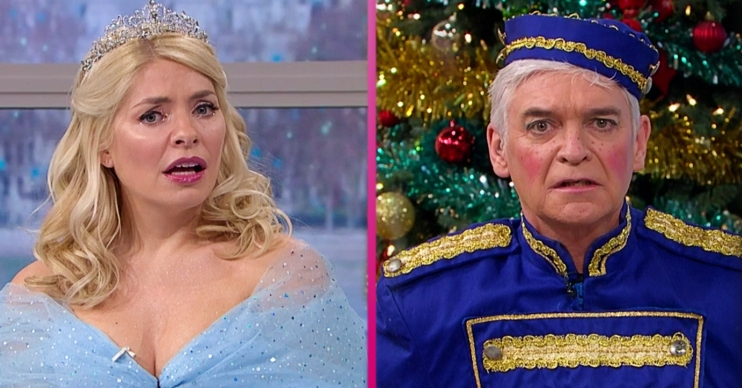 This Morning panto 2020: Viewers divided as hosts dress up in festive display

Oh no it isn't... oh yes it is! Viewers couldn't make their minds up

This Morning got into the Christmas spirit today (Friday December 11) with its 2020 panto.

The show’s regular cast and special guests played out a special, socially distanced version of Cinderella.

But it wasn’t to everyone’s liking, with some viewers calling it “painful”.

What happened in the This Morning 2020 panto?

The fun started when Alison Hammond appeared as the Fairy Godmother, sent to look for costumes for Phillip Schofield and Holly Willoughby.

“Prince Charming is throwing a socially distanced ball, and we’re all invited!” she said.

Phillip urged her to rub her lamp to see what would happen.

She was then transported to Dr Ranj’s Aladdin-style couch, where they spoke to a number of familiar faces.

The Speakmans – aka Nik and Eva Speakman – appeared, as did Gyles Brandreth and Dr Zoe Williams, all in panto costume.

What else happened in the panto?

After the break, Alison presented Phil and Holly with their costumes.

Holly magically appeared in Cinderella’s ball gown and Phillip in a Buttons costume.

Holly loved the costume so much, she broke out of character and said: “I’m genuinely so happy, I’m struggling to keep it together and not cry.”

Joanna Lumley then appeared as the evil stepmother, while Christopher Biggins, Vanessa Feltz, Martin Lewis and Phil Vickery were among more of the familiar faces dressed up.

Finally, Sheridan Smith – dressed as Peter Pan(demic) – performed a showstopper at the end of the show.

Is this supposed to be funny? #ThisMorning

Just turned #thismorning on, what the bloody hell is going on?!

It wasn’t long before viewers shared their views on the festive fun and it wasn’t a great start.

“Is this supposed to be funny?” one viewer tweeted.

Another said: “Just turned #thismorning on, what the bloody hell is going on?”

Some viewers loved it

But it wasn’t all bad.

Some viewers loved it and praised the show for brightening their day.

“I can’t believe how amused I am watching this panto on #ThisMorning, 2020 really has sent me crazy,” one tweeted.

Read more: This Morning today: Viewers flabbergasted by guest who has life-sized elf dolls and cuddles them in bed

“I love this panto,” another said. “Thank you for making wrapping presents fun.”

Watch This Morning’s panto below.