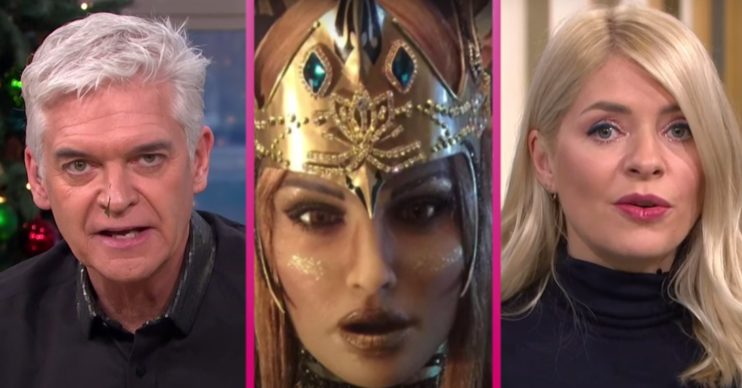 This Morning today: Viewers flabbergasted by guest who has life-sized elf dolls and cuddles them in bed

He insists relationship with £15,000 purchases is not sexual

This Morning fans couldn’t believe what they were watching today as a man who lives with four life-sized elf dolls featured as a guest.

Joining him on his sofa were his Lord of the Rings-style figurines. He suggested the costumed dolls – which cost him £15,000 – are great for ‘keeping warm on a winter’s day’.

Read more: Steph McGovern tears up on show as she reads heartbreaking letter from desperate mum

“Starting from my left, that is Foreshe she’s a forest elf.

I have them there to cuddle, that’s it.

“This is Cavina, the queen elf and the end one is Saoirse – she’s a silver warrior elf.”

Nick insisted he doesn’t have a favourite – but he does sleep with his treasured possessions.

He said: “It’s a comfort thing.

“It’s like having a teddy bear. But they’re a bit more realistic and once they have been warmed up they’re like a hot water bottle.

“They stay warm for hours. In the past I’ve come home from work on a winter’s day and jumped into bed and they’re still nice and warm.”

This Morning guest on life with his elf dolls today

Nick also added the dolls are only in his bed for comfort purposes.

“I have them there to cuddle, that’s it,” he said.

Nick added: “I don’t cuddle Saoirse at the moment, she’s wearing a full suit of armour.”

He explained he began his collection after looking for a small figurine for his radio-controlled aircraft.

Instead, he stumbled upon the life-sized dolls while searching online.

A deadpan Phil concluded the chat: “Well, there you go. Something different.”

A mixed reaction from those watching at home

Viewers at home were left stunned by the segment.

“What… what am I watching here?” asked one person on Twitter.

Another incredulous viewer asked: “How on earth did Phil and Holly keep a straight face while interviewing the ‘Elf man’?”

But someone else worried the show went too far and should consider a ‘duty of care’ to Nick.

They tweeted: “Omg! @thismorning why do @Schofe and @hollywills have these people on the show just to make fun of them as they did with Elf guy?

“The man that showcased his elf dolls. @itv and @thismorning don’t you have a duty of care? Shouldn’t you take responsibility?”

Others were most amused by Nick’s unlikely living arrangement.

Another observer quipped: “Someone tell Nick you’re supposed to leave the elf on the shelf.”

“Live and let live, I say. At least he’s got his elf!” jested a second social media user.

And someone else joked: “Surely there’s an elf and safety issue here?”