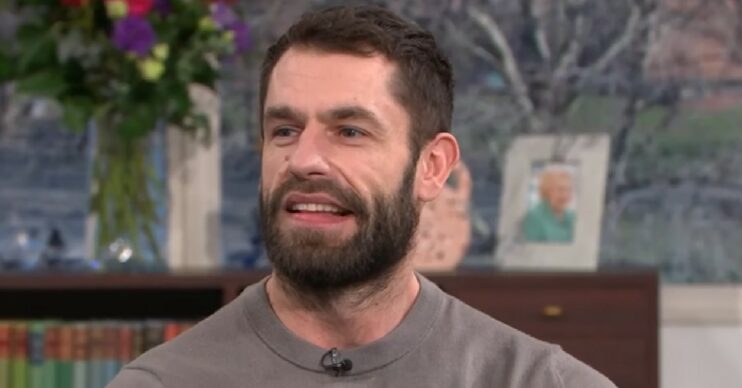 Kelvin Fletcher distracted This Morning viewers today with his outfit as he made an appearance.

The former Emmerdale actor appeared on the programme to discuss his role in the new Channel 5 drama, The Teacher.

He also spoke about his BBC series, Kelvin’s Big Farming Adventure, which documents his family’s move to a farm.

What did Kelvin Fletcher wear on This Morning?

The actor was wearing a pretty simple outfit consisting of a grey sweatshirt and grey checked trousers.

Read more: Why did Kelvin Fletcher quit Emmerdale? Will Andy Sugden ever return?

However, viewers weren’t keen on his trouser choice and mocked him on Twitter.

A couple of people likened them to PJs!

“Did he think the interview would be conducted over Zoom?”

Another wrote: “Still got your pyjama pants on, Kelvin.”

A third tweeted: “Did Kelvin wear those trousers for a bet?”

However, someone replied: “I saw nothing wrong with them, he actually looked very smart.”

On the programme, Kelvin discussed his BBC farm show with hosts Alison Hammond and Rochelle Humes.

Opening up about his family’s decision to live on a farm, he said: “We just wanted a change. I still class myself as relatively young.

“Wife’s young, young family, two amazing children and the sense of the unknown has always excited me.”

He added: “We just wanted to seek a challenge, live out in the countryside and going back to that wholesome, simple way of living.”

Kelvin also spoke about expecting twins with his wife Liz.

The couple are already parents to Marnie, five, and Milo, three.

Read more: Alison Hammond called out for Kelvin Fletcher gaffe on This Morning

He said: “It’s again stepping into the unknown because I’ve got two already but to then have two [at the same time].”

Kelvin stars in The Teacher which airs on Channel 5, tonight, at 9pm.