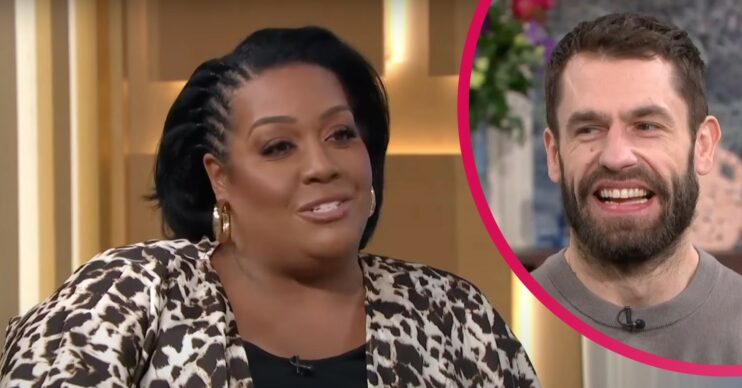 Alison Hammond called out for Kelvin Fletcher gaffe on This Morning

On This Morning today, Alison Hammond got called out by viewers for a gaffe she made while interviewing Kelvin Fletcher.

The 46-year-old received criticism from viewers for pronouncing her guest’s name wrong, live on TV!

Alison, who usually hosts Fridays alongside Dermot O’Leary, stepped in today to host alongside Rochelle Humes.

Together they welcomed Kelvin onto the show to discuss his new Channel 5 show, The Teacher. He also spoke to Alison and Rochelle about his new farm too, which has been the subject of Kelvin’s Big Farming Adventure.

Rochelle and Alison began by speaking to Kelvin about his role on The Teacher, with Alison trying to glean some spoilers from the actor.

“You know you can never trust them ones,” Alison said, grinning at the camera. Kelvin then spoke very highly of the cast and crew, saying to work with them was a “huge opportunity”.

Rochelle, Alison, and Kelvin then went on to speak about Kelvin’s new farm. A show about it has recently aired on BBC One.

Despite appearing on Emmerdale for 20 years, Kelvin admitted he didn’t know anything about farming.

“We just wanted a change,” Kelvin said of moving to live and own a farm. “I still class myself as relatively young, wife’s young, young family, and the sense of the unknown has always excited me.

“We just wanted to seek a challenge, live out in the countryside, and go back to that wholesome, simple kind of living.”

Kelvin’s discussion of his new life in the country and his upcoming TV projects will have interested many. However, it wasn’t all that got some people talking.

Throughout the interview, Alison kept getting Kelvin’s name wrong, calling him Calvin instead! Whilst Kelvin may not have noticed, plenty of viewers did!

What did viewers say about Alison’s gaffe on This Morning today?

Viewers were seriously unimpressed with Alison’s gaffe and took to Twitter to slam the star.

“His name is KELVIN, not CALVIN,” one viewer tweeted. “Had to switch off, very painful very disrespectful.”

“Kelvin, not Calvin, Alison,” another corrected her.

“I thought it was Kelvin not Kalvin, Alison!” a third said.

“Here we go already…it’s Kelvin, not Kalvin,” another wrote.

This isn’t the first time Alison has had viewers talking today. Her appearance on the show in general divided viewers earlier this morning.

Some were overjoyed to see the star co-presenting the show alongside Rochelle. “I’m so happy Alison and Rochelle are presenting,” one viewer said.

However, others were less than impressed with the new pairing. “Rochelle and Alison are seriously crap presenters,” another viewer said.

Did you notice Alison’s gaffe? Head to our Facebook page @EntertainmentDailyFix and let us know!