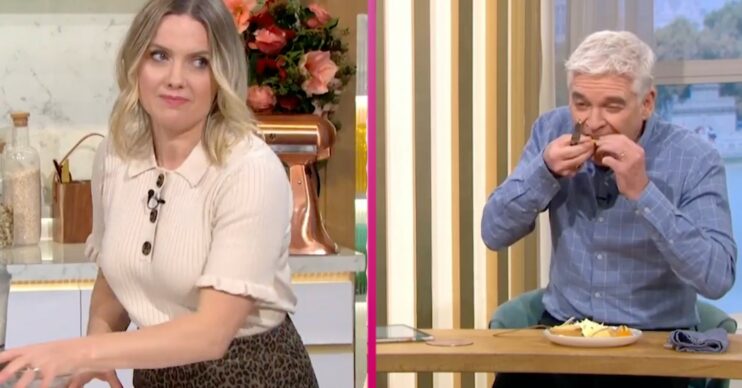 Juliet didn't win over some viewers!

This Morning fans were left horrified by the CHEESE mince pie recipe that was being tasted by Phillip Schofield and Josie Gibson on Wednesday.

Chef Juliet Sear appeared on This Morning to share a recipe with viewers that can be frozen. It was then that she shocked fans of the show by suggesting cheese mince pies.

Juliet was keen to share her bizarre mince pie recipe with both the hosts of the show and the viewers at home.

What did This Morning hosts say about Juliet’s recipe?

After serving up the festive treats, Josie said: “We spoke earlier, and you [Juliet] said about adding cheese?!”

Juliet said: “You can have anything with it [the mince pie]. I make a cheese sandwich for this, so with a nice clonk of Lancashire cheese…because [the filling] is like chutney.”

Juliet explained all of this as she cut a mince pie in half and placed a couple of slices of cheese in the middle. She then put the mince pie back together and took a bite.

What did Phill and Josie think of the weird festive treat?

The hosts of This Morning both had a go at making the cheese mince pie, and strangely enough, enjoyed it.

“Never would I have thought adding cheese to a mince pie – it has opened a whole new world for me,” Josie said.

Philip agreed with her.

He said: “I tell you what, that cheese is really lovely. There has been a revelation here today!”

This Morning viewers were less than convinced by the cheese mince pies however and took to Twitter to voice their disgust.

“Mince pies should be eaten…with other mince pies, definitely not cheese!” one viewer protested.

“Although [Juliet Sear] is correct that Lancashire cheese is the king of cheeses, please don’t go putting a lump of cheese and some clotted cream on your mince pie. That’s not right,” another This Morning fan bemoaned.

“It just gets worse,” a third This Morning viewer cried. “Cheese in a mince pie!”

Josie Gibson, 36, was stepping in for Holly Willoughby yet again on Wednesday. The 40-year-old presenter was off ill with a tummy bug.

Holly sent Josie a message via her Instagram story, thanking This Morning’s newest host for ‘saving the day’.

Posting a picture of Josie with a crown gif on her head, she wrote:

“Thank you @josiegibson85 for saving the day yesterday… you are a dream! I’ll be back as soon as I’m in no threat of vomiting on @schofe.”

Fans have enjoyed Josie on This Morning so much that there have been calls for her to replace Alison Hammond on Fridays.

What do you think of cheese mince pies? Leave us a comment on our Facebook page @EntertainmentDailyFix and let us know.