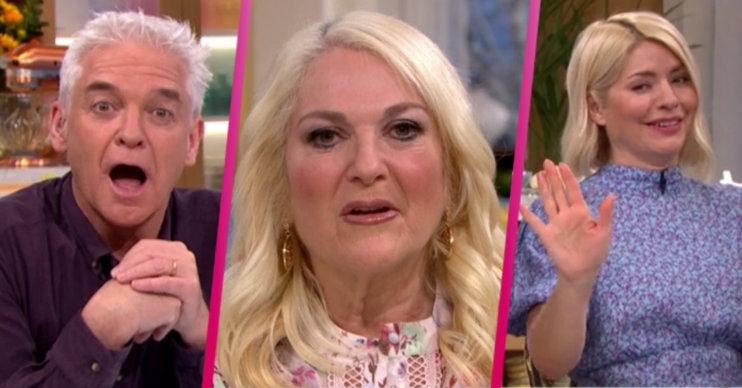 ITV viewers tuning into This Morning today (March 7) had a bit of a shock during the phone-in.

Hosted by Vanessa Feltz, it was a pretty racy one.

It followed on from Vanessa’s sex tips earlier on in the show.

However, neither Vanessa, nor hosts Holly Willoughby and Phillip Schofield were ready for what was to come when they spoke to a caller named Julia.

Julia called up the show and revealed she is turning 60 this year and also celebrating her 10th wedding anniversary.

She started by admitting: “Vanessa you’re my inspiration. I’ve loved you for years.”

Then she launched into her risqué story.

“It’s also our 10th wedding anniversary and we’ve decided we’re going to do everything we can this year,” Julia said.

“We’ve just got back from the 90s Reloaded at Butlins, oh my god, all that raving.

“We took the grandkids and we sent them off to Fantasy Island, knowing it would be shut, so we could have a bit of jiggery pokery while they were away,” she giggled.

However, Julia added: “But they walked really fast and they came back and nearly copped us, we’ve got the window open and everything.”

She then switched things up a level with her next anecdote.

“When we stay with the kids he lends us his bed and he even said to us: ‘Do you still have sex?’

However, she added: “So we’ve had to be really careful with the sheets and things!”

How did Holly and Phil react?

Phil was the first to tell Julia to “stop”.

“I’m too young for this conversation,” Vanessa admitted.

How did This Morning viewers react to the ITV phone-in?

Pretty much with disgust, it has to be said!

One woman said: “I am 61 and find this thoroughly embarrassing, have some dignity ffs!”

Read more: Phil and Holly tear up over coverage of Ukraine crisis on This Morning

Another added: “This is the worst thing I have ever been exposed to on the television.”

“This is getting absolutely disgusting,” another added.

Others said Julia shared “far too much information”.

“I’m not sure any of us need to know any of this Julia! Jesus Christ on a bike! Far too much information,” they said.