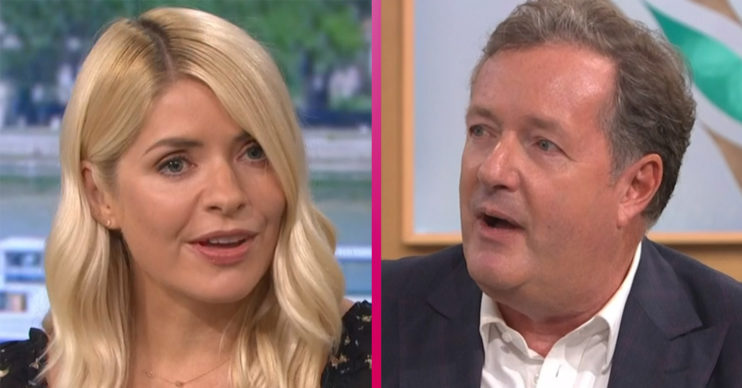 The Kardashians have ended their hit reality show after 14 years

This Morning host Holly Willoughby clashed with Piers Morgan over the Kardashians on today’s show.

They were discussing the news that the famous family have announced the end of their hit TV series Keeping Up With The Kardashians.

Piers shared his lack of sympathy and called the stars of the show “talentless” and “wastrels”.

Piers, Holly, Phillip Schofield and Andrew Neil discussed the news as part of today’s This Morning View, which sees the stars talking about the latest news headlines.

What did Piers Morgan say on This Morning?

Piers Morgan first sarcastically said he was devastated the show was coming to an end.

However, Holly asked: “Why do you hate them? I have to say Piers you are particularly cruel.

“I always think this, you are really, really mean because they are human, they are people with feelings.”

Piers said: “They are talentless wastrels who made billions by conning the world that there is something compelling about them.

“What is entertaining about them?”

Holly insisted: “Oh it is, it’s like candy floss for the brain and sometimes we need that.”

However, Piers said: “I literally felt, like the few times I accidentally caught it on the TV, I could feel my brain cells starting to erode.

“They have done nothing but make the world more stupid.”

Meanwhile, on Tuesday evening, Kris Jenner and Kim, Kourtney and Khloé Kardashian announced the end of their show.

A statement from the family said: “It is with heavy hearts that we’ve made the difficult decision as a family to say goodbye to Keeping Up With The Kardashians.

“After what will be 14 years, 20 seasons, hundreds of episodes and numerous spin-off shows, we are beyond grateful to all of you who’ve watched us for all of these years.

“Through the good times, the bad times, the happiness, the tears, and the many relationships and children.

Read more: Piers Morgan demands Harry and Meghan are stripped of their titles