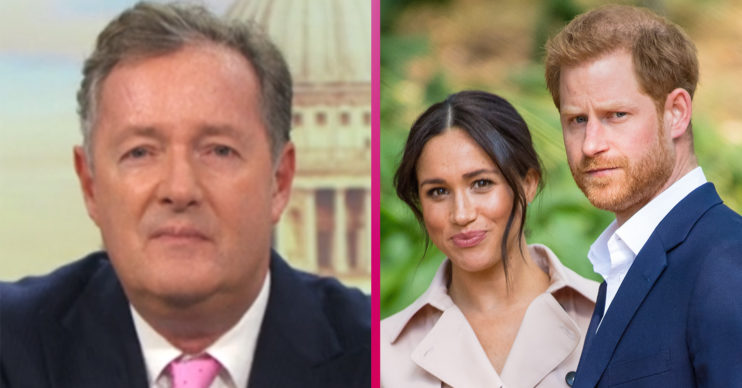 Piers didn't hold back in his views

The GMB presenter, 55, is never shy about offering opinions on the exiled royal couple, and today (Tuesday September 8) he let rip once again.

What did Piers Morgan say about the couple?

Last week, Harry and Meghan announced that they had signed a ‘mega-deal’ with TV streaming giant Netflix.

Their as-yet-unnamed production company will make movies and documentaries.

And the deal is said to have paid off the outstanding renovation costs of Frogmore Cottage.

It didn’t take long for Piers to comment on the development.

“I think that’s another step towards the divorce.”

“Well they have a lot of money now from Netflix,” co-presenter Susanna Reid said.

Piers added: “Yeah, so it was Netflix that won it.

“But, if they really wanted to be independent and live in Hollywood and Santa Barbara, and make “woke” movies, then that is fine.

“But as a Sussex resident all my life, I don’t think they should be allowed to keep their titles as Duke and Duchess of Sussex.

“If they want to be independent and apart from the Royal family, why would they want the titles?” Piers concluded.

What else has Piers been up to?

Piers has been a busy boy this week.

a) We had our highest ever ratings last Tuesday.
b) We're not in lockdown. https://t.co/Lz6zObAX7M

He also slammed claims that he wants another coronavirus lockdown, by taking to Twitter.

Piers, who crowed about record ratings on GMB when he returned to the show last week, took down a follower.

As a Sussex resident all my life, I don’t think they should be allowed to keep their titles as Duke and Duchess of Sussex.

After claims that he wanted another country-wide shutdown to boost ratings, Piers said: “a) We had our highest ever ratings last Tuesday. b) We’re not in lockdown.”