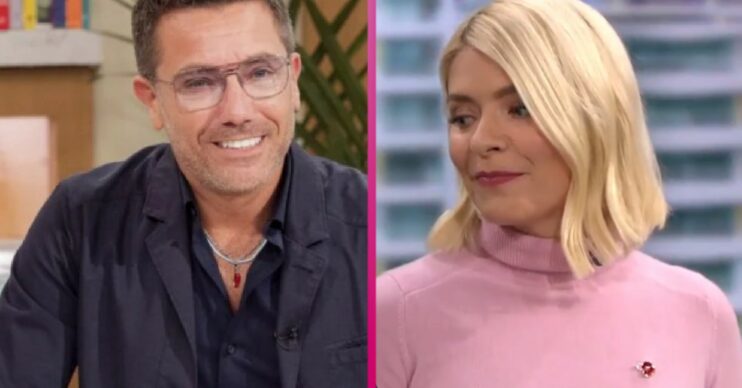 The Italian restaurateur, known for his naughty humour, left Holly stunned after he quipped about his home country in a segment about tiramisu.

While using Holly as a makeshift map of Italy with her belly button as Rome, he spoke about his heritage.

And as he gestured to her nether-regions, he said that he’d spent most of his youth “playing and training near your vagina”.

Gino D’Acampo on This Morning

Holly and co-host Phillip Schofield were visibly shocked by his comment and fans on social media weren’t pleased either.

“When is Gino going to start being reined in?” asked one disgruntled fan on Twitter.  “He used to be funny. Now he’s just rude and inappropriate.”

Another agreed, saying: “I think Gino has gone too far now.”

“Get Gino off vulgar to say the least,” commented another viewer while a fourth wrote: “Sack Gino crude, rude and unprofessional.”

But not everyone thought his remark was below the belt.

“We need more of Gino on This Morning,” tweeted a fan. “He is just hilarious.”

“Oh Gino you make me laugh,” wrote another.

What did Gino say to Holly?

A third added: “Gino you are a legend never know what’s going to come out of your mouth lol vagina so so funny.”

While making the dessert in the studio kitchen, Gino said to Holly: “Put your finger in your belly button, that is Rome.”

Phil could already see that the segment was quickly heading south and replied: “I’m very concerned if he’s going to start talking about Sicily here.”

Gino replied, saying: “No, Sicily is all the way down here. But if your bellybutton is Rome, I was born in Naples, which is on your side.

“But I went to school where Vesuvius is. It’s more inland so I can technically say I spent my youth training and playing around… your vagina.”

Gino has recently returned to This Morning after more than a year away working on other projects.

He was back on screens in September and viewers were all stunned by his apparent new look.

They were left dazzled by his bright white teeth and took to Twitter, of course, to share their amusement.

One said: “Gino‘s teeth are so white I’m surprised he’s not bombarded by moths!”

A second tweeted: “Gino‘s teeth are about as white as Holly’s dress! #ThisMorning”

Did you think Gino’s comment was rude or hilarious? Leave us a comment on our Facebook page @EntertainmentDailyFix and let us know what you think of this story.