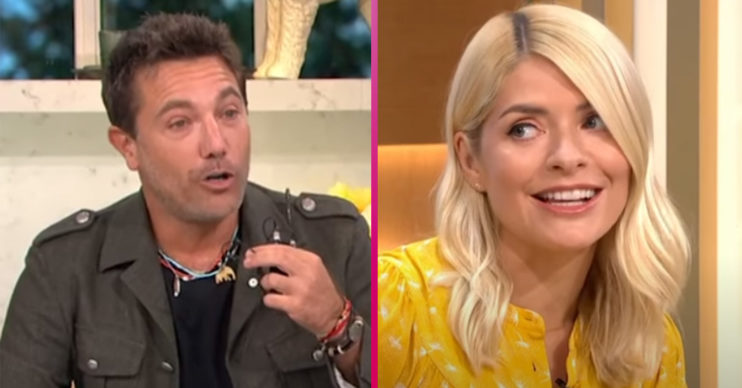 This Morning: Gino D’Acampo leaves Holly Willoughby horrified as he flashes his bum on return

This Morning chef Gino D’Acampo flashed his bum on his return to the show, leaving host Holly Willoughby horrified.

The presenter, 39, was left red-faced when the celebrity chef gave viewers a glimpse of his behind.

What happened when Gino D’Acampo returned to This Morning?

The TV chef, 44, made his first return to the studio since the summer holiday.

And, as ever with Gino, you never know what might happen.

Sure enough, while Holly was telling viewers the Italian TV favourite would be back, cameras panned to him chatting to cameramen behind the scenes.

For some reason, he had his trousers around his ankles.

It was then that Gino pulled his pants up to reveal his buttocks to camera.

Somebody get an anti-bac wipes immediately for my eyeballs!

“Somebody get an anti-bac wipes immediately for my eyeballs!”

How did Holly react to Gino and his cheeky flash?

Gino moved into view and said something off-mic.

“We’ve had a lot of distractions since you’ve been away I have to say, but that made my jaw drop slightly,” Holly said.

What else is happening with Holly at the moment?

Meanwhile, all the fun and japes in the studio is a far cry from the impending legal battle Holly is allegedly gearing up for.

Reports claim that the telly favourite is involved in a dispute with her former talent agency.

As a result, The Sun says that Holly isn’t happy with her former talent agency YMU, who allegedly tried to claim 15 per cent of her future earnings.

“Holly is a strong, savvy, very successful woman working in a tough industry — she won’t be taken for a fool,” a source said.