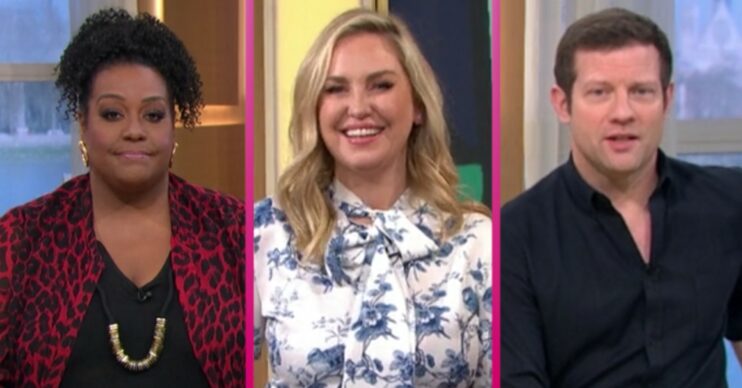 Josie has become a favourite with viewers at home

This Morning viewers have called for Josie Gibson to take over from Alison Hammond and Dermot O’Leary as a main host.

But it appears that fans are missing Josie as a main presenter following her successful stint before Christmas.

During the programme today, Josie shared her handy hacks with Alison and Dermot.

One of the hacks included using a pillowcase to help store bedding.

Read more: This Morning: Alison Hammond criticised as she apologises to Juliet Sear for gaffe

She also opened the segment by giving an insight into her Christmas Day with Alison.

The pair recently spent the festive day together, with Josie revealing: “I’m not just saying this because Alison is in front of me, but it was the best Christmas dinner I’ve ever had.

“You keep saying your turkey was dry, but it wasn’t!”

How did viewers respond to Josie’s return?

Following the segment, viewers rushed to social media to share their thoughts.

Many loved seeing Josie back on screen and called for the star to become main presenter.

Taking to Twitter, one said: “#ThisMorning Can’t we have Josie presenting again or Ruth? Can’t be doing with Alison. So unprofessional and constantly interrupts.”

Josie should present in future

A third wrote: “These two are woefully poor presenters. Why is Josie not doing it? #ThisMorning.”

A fourth shared: “Dermot looks like a child lost while Alison uses her fake laugh far too much. Josie should present in future #ThisMorning.”

Dermot looks like a child lost while Alison uses her fake laugh far too much. Josie should present in future. #ThisMorning

#ThisMorning Can't we have Josie presenting again or Ruth? Can't be doing with Alison. So unprofessional and constantly interrupts.

These two are woefully poor presenters. Why is Josie not doing it? #ThisMorning

You put it far better than I did – and you’re absolutely right!

Another praised the star, saying: “Josie was a far superior presenter to Alison and Rochelle [Humes].

Meanwhile, it comes after Josie recently hosted the show alongside Vernon Kay.

Read more: Alison Hammond distracts viewers with appearance as she returns to host This Morning

The pair impressed viewers with their partnership, with some even demanding for the two to host more regularly.

Josie previously made her debut as host after taking over from Holly Willoughby.

The star was called in after Holly suddenly fell ill.