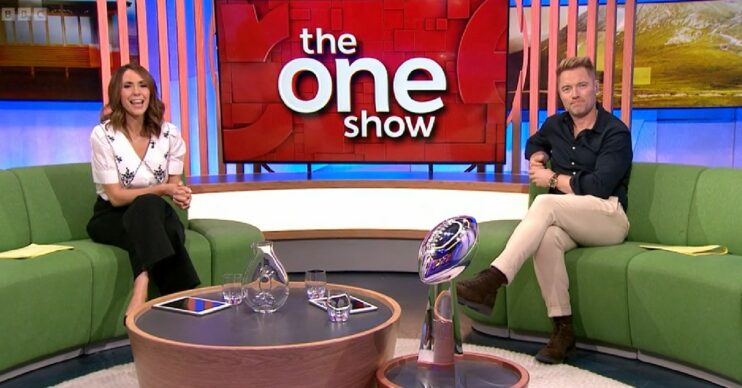 The One Show: Ronan Keating distracts viewers with appearance

The One Show viewers were left distracted by Ronan Keating last night as he sported some very tight trousers.

However, it was Ronan’s beige trousers which got viewers talking!

Ronan Keating on The One Show

As the show began, viewers started taking to Twitter to poke fun at Ronan’s tight trousers.

One person said: “Them trousers, too tight! #theoneshow.”

One joked: “Looks like he’s got a giant chicken leg.”

A fourth added: “Must have taken Ronan a while to get into those pants. #theoneshow.”

Another quipped: “Ronan needs fake tan on his pasty legs or at least put some trousers on #theoneshow.”

Last week, Ronan left many of his fans emotional as he paid tribute to his late mum.

He said on Instagram: “24 years ago today I lost my mum. My family and I went through the most horrible situation losing our mum.

Ronan concluded his message urging fans to pay attention to their health.

He added: “One message would be pay attention to your bodies. Cancer is such a horrible disease and early detection is the best form of survival.

“Mum died from one of the most curable forms of cancer, which is heartbreaking.”

The One Show continues on BBC One, tonight, at 7pm.

What did you think of Ronan’s appearance last night? Leave us a comment on our Facebook page @EntertainmentDailyFix and let us know.

Ronan Keating The One Show