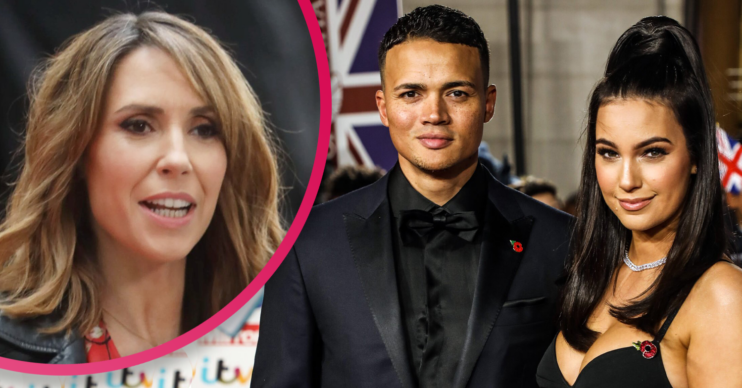 The One Show’s Jermaine Jenas has announced his wife Ellie has given birth to a baby boy.

This is couple’s first son together, but fourth child overall. Together, they have two daughters, eight-year-old Geneva, and four-year-old Olivia.

Jermaine also has 14-year-old daughter Sancha from a previous relationship. She lives in the States with her mother.

What did Jermaine Jenas call his baby boy?

He also revealed that the little boy is Calle Jacob.

“You have no idea how loved you are! Good luck with three big sisters though!!” he quipped.

The former footballer announced the happy news back in May, revealing his wife’s pregnancy while hosting The One Show.

And his co-host Alex Jones was one of the first to send her best wishes.

She said: “Ah congratulations!!!! He’s a beaut! Love the name too. Enjoy the newborn cuddles.”

Encouraged by co-host Alex Jones, who was pregnant with daughter Annie at the time, Jermaine said: “I have a baby on the way, and it’s a boy! Very excited in our house.”

He later laughed: “The four-year-old’s not took it too well though if I’m honest with you.

“The eight-year-old is already practicing, the four-year-old just put a face on her like, ‘I’m the baby in the house, let’s not be doing this’.”

It’s not known how long Jermaine and Ellie have been together, but they were engaged in 2009, and married in 2011.

However, it was far from an easy road for them.

Read more: Jermaine Jenas wins over The One Show viewers

“It was love at first sight when I saw her, but not for her,” he told Belfast Telegraph. “She wasn’t impressed by this cheeky, cocky guy who thought she’d be bowled over when I drove up in my Ferrari. She actually made me get rid of the car because it was too noisy!

“She’s told me she thought when we first met that I was a bit of an over-confident idiot, but I won her over finally.

“She’s down-to-earth, not interested in football and was never impressed by any of the flashiness of it. She stabilised me, calmed me down, helped me grow up and mellow, and was totally supportive when everything was going downhill through my injuries.”