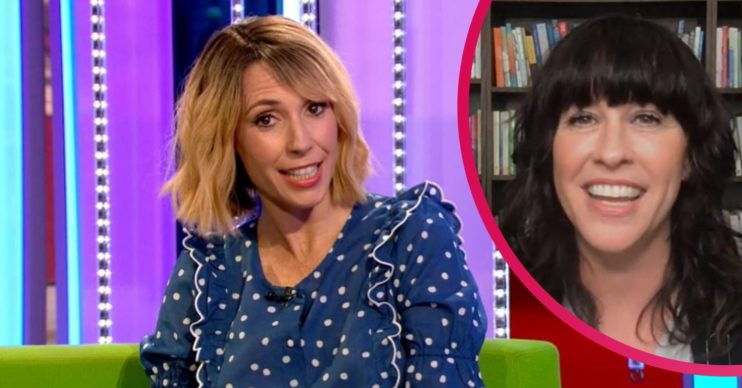 The One Show: Alanis Morissette stuns viewers with pre-watershed ‘F-bomb’

The Ironic singer has a new album out

The One Show viewers were stunned last night when Alanis Morissette appeared to drop the F-bomb live on air.

The programme, on BBC One weekdays at 7pm, had the Ironic singer on for a chat about her new album, Such Pretty Forks in the Road.

What did Alanis Morissette say on The One Show?

And as she heaped praise on one of the show’s presenters while speaking via video link, Alanis appeared to casually slip in a swear word.

At the end of the episode, host Alex Jones said: “One thing, Alanis, can you just say hi to Nikki? Because it will make her life.”

Nikki Fox, who was on to present the Watchdog segment, protested: “Stop it!”

Alanis then said warmly: “Hi Nikki, I was just watching your interview before I was on and you’re so [bleeping] lovely and smart.”

Guest-host Gethin Jones, appearing not to have heard, quipped, “You’ve done it now” as Nikki gushed: “Alanis, are you joking!?

“That I Would Be Good is one of my top five favourite songs.”

Those watching at home were stunned and found it hilarious, as one asked: “Did @Alanis just say ‘[bleeping] lovely’ on @BBCTheOneShow? You can’t say that on the teleeeeeee #TheOneShow.”

The BBC thought Alanis would be safe.

Another tweeted: “Did Alanis drop the F-bomb? #TheOneShow.”

A third joked: “Isn’t it ironic that the BBC thought Alanis would be safe for #TheOneShow at 7pm #fbomb.”

Someone else wrote: “Did Alanis Morissette just get away with the F word on BBC The One Show? Ha #TheOneShow #alanismorissette.”

Did Alanis drop the f bomb?#TheOneShow

Alex then had to cut the chat short as they had run out of time, warning: “We’re going over now.”

It follows an interview on the programme last week (July 30) that had viewers in stitches.

Alex and guest-presenter Michael Ball were chatting with pop rockers McFly when one member of the band hung up on them.

At the end of the chat with McFly’s Danny Jones, who was in the studio, and Tom Fletcher, Harry Judd and Dougie Poynter – all speaking via video link – Michael started to introduce the next segment.

“Cheers guys,” he said. “After a grey start, the sun has been shining today apart from in Scotland, where it’s been raining…”

As he spoke, Dougie had logged off before the others on the screen behind them, his video square replaced with a black screen.

Alanis Morissette BBC BBC One The One Show