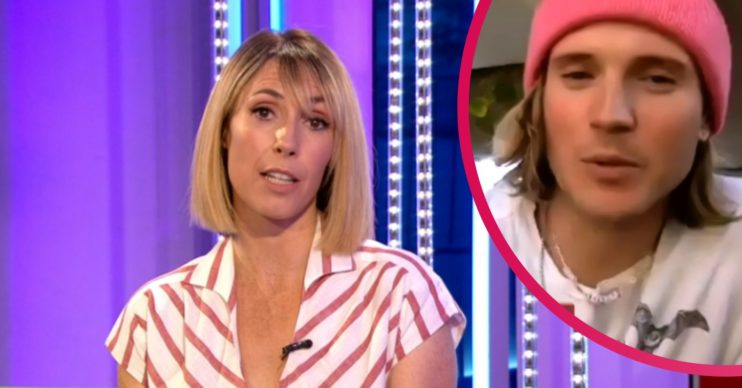 The One Show: Viewers laugh as McFly rocker Dougie Poynter ‘hangs up’

He was off 'without hesitation'

The One Show viewers were in stitches last night when Dougie Poynter from McFly appeared to hang up on his fellow band members and the show’s hosts.

The pop rockers were on the programme on Thursday (July 30) evening, with Danny Jones joining presenters Alex Jones and Michael Ball in the studio, and Tom Fletcher, Harry Judd and Dougie joining the chat via video link.

What happened with McFly on The One Show?

At the end of the interview, Alex thanked them for coming on.

“Special thank you to Danny, because you’ve been with us in the studio,” she said. “But thanks to all of you guys. And great to see that you’ve got the new single out.”

Read more: The One Show viewers call for more Rylan Clark-Neal as his stint as guest host ends

Tom told them: “Thank you for having us!”

Michael then started introducing the next segment: “Cheers guys. After a grey start, the sun has been shining today apart from in Scotland, where it’s been raining…”

But behind them on the screen, Dougie had logged off before the others. His square showed a black screen with a dinosaur icon.

Dougie had ‘somewhere to be’

Harry Judd and Tom Fletcher, who were still on, joked around in the background by looking confused and pointing at Dougie’s blank screen, before the studio TV switched to The One Show logo.

Those watching at home noticed it too and found it hilarious. Viewers joked that Dougie seemed to have “somewhere to be” and logged “without hesitation”.

There was no hesitation.

A third quipped: “Got somewhere to be, yeah?! @DougiePoynter #TheOneShow.”

Someone else agreed: “There was no hesitation was there.”

Earlier in the show, producers played a clip of McFly’s new single, Happiness. And afterwards, the band mates talked about going to group therapy to sort out “issues” ahead of their reunion.

Harry told Alex and Michael: “There were issues, there were. But even at the beginning of that session. We only ever had one session. But I remember Dougie started talking first and he opened up – in that first 20 seconds of talking – more than he ever had in front of just the four of us.

“So it was just a space… we’ve been through so much together. We’ve been a band for 17 years. And it was just a neutral environment for us to be able to speak ourselves.”

What did you think of the McFly interview? Leave us a comment on our Facebook page @EntertainmentDailyFix and let us know.